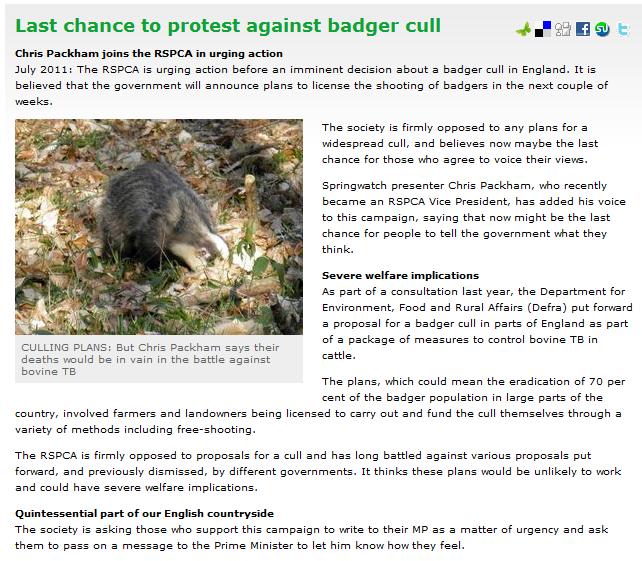 There is further Information on the next Post as to the lack of effect a Cull would have on TB in Cattle, and that it would be a sensless slaughter of Badgers.
As you will see in the post after, one of our members has emailed her MP, and as kindly agreed that the email may be copied, and amended where required. To send to your own MP or you could send your own

maybe this will help stop the cull 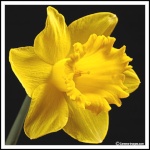 Thanks for the info WS and also for the useful link PPH.

I have just sent an email to my local MP, Nick Herbert, quoting some of Lord Krebs findings and thoughts, and also my own.
I have asked for a response from him or the Prime Minister (doubtful on that one but worth an ask).
If I do hear anything from either of them, I will post it on here.
Heres my email.

I am an Angmering resident and therefore writing to you as my local MP. I request your assistance in passing on a message to the Prime Minister.

I understand that this week, Parliament are planning on making a decision on mass Badger culling in an attempt to reduce Bovine TB in cattle.
As I am sure you are aware, a former Government scientific advisor, Lord Krebs, advised a cull in 1997 to see if the culling of Badgers would reduce Bovine TB, this proved to be ineffective. Over the ten year period, thousands of Badgers were culled but in real terms, it only reduced Bovine TB by 16%. No doubt farmers would say that 16% is better than 0%, when in fact, many thousands of Badgers lost their lives in an ineffective attempt to reduce Bovine TB.
Lord Krebs states," that if you cull intensivley for four years, Bovine TB would only be reduced by 12% - 16%, leaving 85% of the problem." Surely this in not cost effective and as the Farmers are talking cost with the loss of their cattle, surely there is a better way.
Rather than spending huge amounts of money on hireing marksmen and training farmers to be top marksmens, it would be better to spend the peoples money in developing a vaccine to eradicate Bovine TB and in the interim, Farmers could make sure that better biosecurity measures were in place to make sure that their cattle did not come into contact with Badgers.
These are the suggestions of Lord Krebs and they make a far better animal welfare suggestion than just simply lets get out there on a mass cull.

I have looked at your web site and apart from your updates on the south Downs Park, which is about saving the South Downs, I see no views on animal welfare and where you stand on wildlife and the preservation on British Wildlife.
Badgers are a huge part of our wildlife and surely we should be doing as much as we can to preserve them. Wildlife all over the world has, in some way, got to learn to live with each other and in some instances, man can not interfere with the natural balance of things but he can strive to prevent cross disease.
Badger culling is surely an outdated and proven failure. We have the technology to produce a vaccine to prevent Bovine TB and surely this is a more modern, sensible and humane way forward and put a stop to mass Badger Culling.

I would be grateful if you could pass my plea onto the Prime Minister and look forward to his or your response.

I have added my name and address in the hope of a response.

Thanks for the Link PPH, at least that gives Animal Welfare Groups some amunition to fight the Cull with.
Thats a great email LW, and does go to the heart of the problem. It's been the same all over the World for decades. If there's a problem between Animals, and Humans the answer's been get rid of the Animals that one of the main reasons so many Animals are endangerd, it's about time we learned to co-exist after all we're supposed to be the one's with the brains, and scientific knowledge. Lets use it

Would you mind if Guests & Members copied your email, and just changed the place names or left them out LW. Then they could send them to their own MP's
WS

Thats a great email LW , I am hopeful that some sense will prevail over this subject which has been going on since my grandfather farmed in the 60s

No problem WS. If other members want to copy it or tweak it as they see fit I am ok with that.

PPH I too hope sense will prevail over this. Badgers are beautiful creatures and they need lots of voices at the moment.

Thanks WS, PPH and Littlewid.

I think we all know culling is not the answer. I hope you get a response to your email Littlewid. I will email my MP today, last time I emailed re the circus I didnt even get a reply and the time before that I got the standard tow the party line response. It makes me sad that MP's would rather do that than fight for what they believe or indeed what their constituents want.

As I didn't get a reply last time I emailed I decided to telephone instead.

In principal he supports the badger cull - we are a farming constituency here so I understand that, given that all the farmers appear to be keen on a cull, but he is prepared to accept there is a much bigger picture, not enough evidence etc etc. Off the record he thinks it won't go through and will remain on the backburner.

I am saying no more at the moment.

Thanks for that Lai. As a country Lad myself from Cheshire. I also understand the Farmers point of view, but when you look at the scientific evidence it doe'nt support the promise that a Cull would solve the problem, and it would be better to vacinate in the long term
WS

I totally agree WS - I am not for a cull at all and did say that, we have badgers here and I would defend them at all costs. I am merely one constituent voicing my concerns, so it will be interesting to see if it comes to it which way he votes.

The problem is the lack of understanding and emotions, there is no scientific proof to say that a cull would solve the problem and how on earth would you cull the entire badger population? Honestly, politicians should stay out of a lot of things!

Brilliant that you telephoned and voiced your opinion Lai. It will be lovely if the cull does not happen and as already proved, it wont solve the problem at all. I too am a huge Badger admirer and will fight for them too. I am hoping he is right and the vote will not go ahead.
As yet I do not have a response, I hope I get one but if I don't I will be challenging him as to why he did not respond.
I also agree that polititions should stay out of a lot of things.....they are not the experts ( not that I am either but they profess to be and I don't).

No reply as yet from Nick Herbert but received this email from his PA today.

Dear Ms Webster
Thank you for your e-mail to Nick Herbert MP. Nick reads of all his emails personally and he will respond to you. Please bear with him - he receives hundreds of e-mails, letters and telephone calls a week and likes to give each one his personal attention.
Yours sincerely
Gloria Nicholl
PA to Rt Hon Nick Herbert
MP for Arundel & South Downs
& Minister of State for Policing and Criminal Justice
House of Commons
LondonSW1A 0AA
Tel: 020 7219 4080Fax: 020 7219 1295
www.nickherbert.com

I will post his response when I receive one

that's a good start Littlewid. Looking forward to the reply.

bad news indeed - fingers crossed you are right PPH and the government do a U turn on this.

Lai. Let's hope they do U-turn on this one.

With all my heart I pray they do a U turn. It has already been proved by Lord Krebbs that mass culling will not have the desired effect. What if they kill females Badgers with young, I bet they don't care about that either, let alone it is still senseless killing because it will not reduce Bovine TB by the amount they want to. They should plough money into sorting a vaccine.
Lets hope the campaign work will stop this senseless act being passed. It really makes me so upset.

As yet, no word from my MP......looks like he is in for another email.

I saw that Simon King had tweeted this today :- "Appalled by Government's decision to cull badgers. Flies in the face of science, reason, economic sense and foresight. No doubt BTB must be controlled. We need an enduring and effective solution. Badger cull not it. Vaccine the way forward"
We're with you SK

Yes I read his Tweet Doogs - we need more people like him to support the vaccine not the cull.

It does not make for good reading.

Thanks for that WS, gives me more amunition when writing back to my MP. I received an email from him last night that does not make good reading. He also gave me a link to an article he has written in a sussex magazine. I still need to read that and will do so today, then I can reply to his email in an informed manner.
I am also going to find the address of the guy who looks after the Badgers where I went on my birthday last year at Cowdray Park and try and get his take on all this.
So I will post back on here later.
littlewid-x-