The last week and a bit of data shows once more that the boys are not afraid of walking around to get what they want. Although they still spent most of their time close to the old holding pens, they have made a number of long trips out. First they went east, getting to about 2.4 km away from the edge of NRNR, then west to the Bushman Koppies, before returning to the pens. From there they headed north to Quivertree Forest, this time getting to less than 300m of the reserve boundary. Completing their compass wheel they one again headed south to the pens and the following day headed south to the Losberg for just a few hours. As of yesterday morning they were off to the North-West.

They do not appear to have visited either Keerweder or the pan.

I will be out of Internet contact for the next nine days. I aim to get the next update out for the Boys on May 20th

Another great link - thanks WS

I love the updates!

Sheba has a new home

Great news!! Sheba the cheetah has a new home!!!!

Check out the latest blog update for all the information:

Fantastic news - thanks for the update and the link SM

It's really great to get some good news on Animal Conservation, and this is really a happy ending for Sheba, and one he deserved thanks for the nudge SM
WS

I like these good news stories and to make it even better Sheba has an enclosure mate menelik, how wonderful is that, a new home and a new brother, all thanks to the good work of the CCF and the Born Free Foundation.
Thanks for posting the news SM.
littlewid-x- 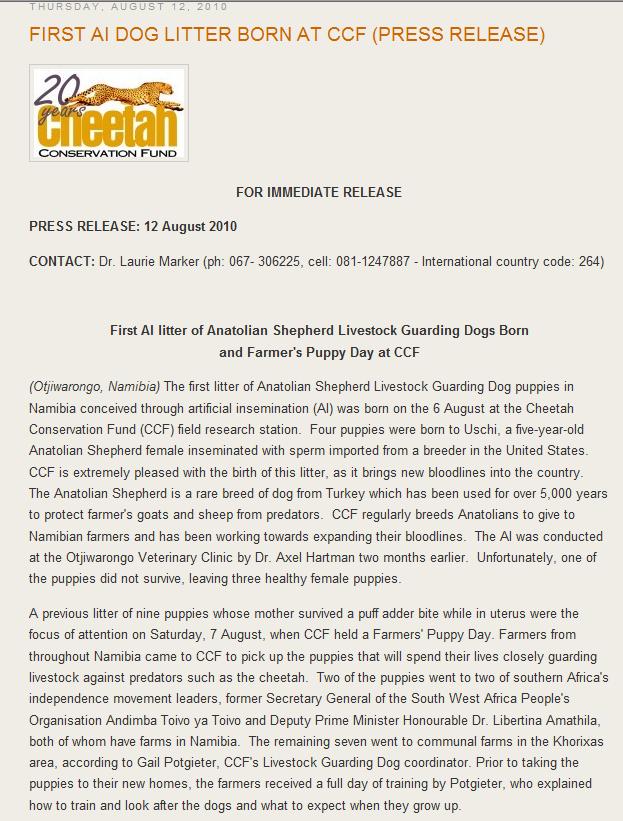 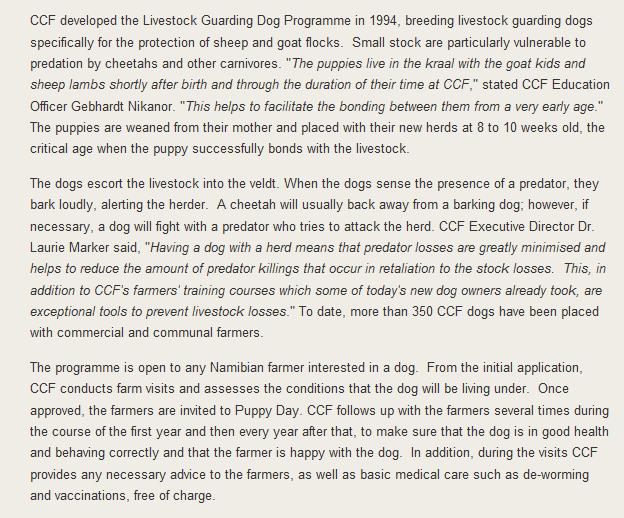 I think this is brilliant news because it helps to keep the Cheetah safe from people protecting their animals, as well as the livestock. We could do with more inovative thinking like this, as it helps to keep predators and local communities living together in harmony
WS

It really is a brilliant scheme isn't it, it saves the lives of the livestock and also the predators, so it's a win win situation. As you say Lai, it would be nice if it was introduced further afield than just Namibia.

A year of successes and setbacks


A Year of Successes and Setbacks
Dear friend of CCF,
This last year, CCF's 20th anniversary, has been memorable for good and for not-so-good reasons.
Perhaps nothing better illustrates the up-and-down life of species conservation than the day we released four long-time captive female cheetahs into our very large Bellebenno game camp. The camp, which contains an abundance of cheetah's natural prey, is a safe place where these females could learn to hunt. If they were successful, they could be returned to the wild, as the NamibRand boys were in early 2009. To return a captive cheetah to the wild—long thought impossible—is a huge boost to our morale (and a $5,000-a-year savings), but we had no time to celebrate: That same day we received four very young orphaned cubs (top left photo), scared, filthy and underweight. Once again the CCF staff went to work, and the top right photo shows how they blossomed into healthy, seemingly content cubs. But the fencing in the background is a reminder that, because they were orphaned so young, they may need to remain at CCF their entire lives.
Working to save a species is often a two-steps-forward, one-step-back process. But at CCF we remain determined to continue our march until the cheetah as a species is safe. Despite CCF's 20 years of work, much remains to be done. We rely on you, as part of our army of supporters, to keep us moving in the right direction.
As 2010 draws to a close, we hope you will help us once again by contributing to our $200,000 matching challenge. All donations up to $200,000 will be matched dollar for dollar, through December 31. Your donation is tax-deductible.*
Please DONATE TODAY to our year-end challenge, so that we can keep moving forward. Without your donations, we cannot return more captive cheetahs to the lives they should be living or work to keep cubs such as the ones pictured above free to grow up wild and free. Please help us continue our work!

Thank you and happy holidays!

Dr. Laurie Marker
Founder and Executive Director
P.S. And what of the four females released into Bellebenno? They have turned out to be skilled hunters and are doing extremely well, as evidenced by the photo at right.


* Donations through the Donate Now buttons are tax deductible for U.S. residents according to U.S. tax laws. To make donations in the United Kingdom, Canada, The Netherlands, Germany and Italy, please scroll down.
P.S. Please forward this to your friends and family to let them know about our year-end challenge!

Click here to share this email with others.
Share on: Facebook Twitter
CCF is supported globally by affiliate non-profit organizations in the United States, United Kingdom, Namibia, Canada, Japan, The Netherlands, Italy, France and Germany. For our international locations please visit http://www.cheetah.org/?nd=international
Cheetah Conservation Fund
PO Box 1755
Otjiwarongo, Namibia
We intend to send communications only to those in our database who have expressed an interest in our organization. To update your preferences or to be removed from this list please click on the link at the bottom of this e-mail or e-mail us at info@cheetah.org, and please accept our apologies for any inconvenience.

Thanks for the update Lai. It's great to know that Cheetahs are being released back into the wild. It seems that CCF, are having the same success as Cheetah Outreach, the progame we have been following Cheetah Kingdom on ITV. They released a group of Cheetahs, all apart from one are doing well, poor Franky was killed by a Leopard. The hard part for these organisations, is that the Cheetahs natural instinct will get them hunting, but they do'nt learn who to avoid, but I think its better that they get their chance in the wild than to remain in captivity. Lets whish them continuing success in the future
WS 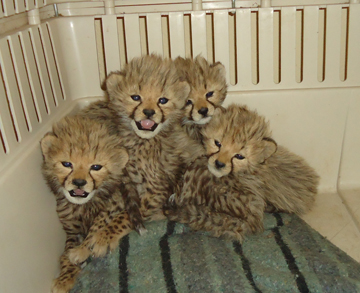 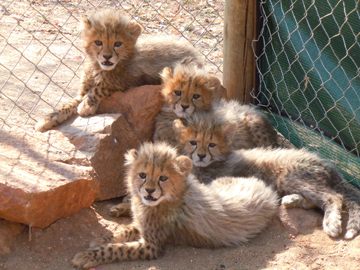 Thanks for posting Lai - I hope you don;t mind but I've put the two photos they were referring to in their email/newsletter in this post so everyone can see how gorgeous they are

Brilliant that the four released females are doing so well but such a shame they have been replaced by these little tooters needing all the help they can get from CCF. The long term prognosis for a return to the wild doesn't look good but here's hoping something good might happen along the way and change all that - we all know it's possible to hand rear Cheetah and put them back to the wild successfully, Simon and Toki proved that but we all know as well that it takes a lot of hard work and dedication.

Totally agree with you WS that the Cheetah are better off in the wild than in captivity, even if it does mean that some of them won't make it. They are very much at risk if they are brought up in the wild from the beginning of their lives, never mind if they are released at a later stage. The wild ones just have the slight advantage of mum telling them what to go for and what to avoid if she's been with them throughout their lives, it's not easy for humans to get that message across to captive bred ones.

they are so gorgeous to look at so you're a

They were just too adorable not to let everyone see

I did see this news and was so pleased to see the four girls had been released and are doing well. These cubs are very cute indeed - i would love to cuddle them

Thank you for the update Lai and also the pics Doogs. As you've all said, brilliant four got released but sad that four more are now needing care. Cheetah's have such a tough life and maybe thats why they are my favourite cats, but thanks to CCF and Cheetah Outreach they do stand a better chance. It's just a shame they cant all remain in the wild living the life they deserve and safely.

Email from CCF this morning :-

How do you say goodbye to not only your best friend but an icon of wildlife conservation? That is the question that has constantly run through my mind since Chewbaaka's death in April, a death I was neither expecting nor prepared for.

Tens of thousands of people met Chewbaaka when they visited CCF in Namibia. For 15 years, his instincts showed people what makes a cheetah so fascinating and so endangered. His blazing speed as he chased his lure put into perspective just how fast the cheetah is and left many jaws agape. His effortless spring into his favorite playtrees illustrated the cheetah's social networking system and explained why it is so easy to trap cheetahs as they try to make their way to these trees. And his regal bearing left an indelible impression on everyone who met him from young children to heads of state.

Following Chewbaaka's death, we received hundreds of notes saying that this cat had left a legacy of understanding and tolerance toward cheetahs that did not exist before his birth.

- educating people who live in cheetah areas about how they can peacefully coexist with predators,
- feeding and caring for the orphaned cheetahs at CCF, and
- exporting our proven practices to all cheetah range countries

does Chewbaaka. Here's hoping his death brings much needed funds to the organisation

Thanks Doogs, just read my email but as you say what a

Some good updates recently on this blog:

Thanks SM - it really is such a good blog and great to catch up with all their news.

Penda the dog is a real

with those tiny little puppies.

worth it I know, but a shock to the system!

A Facebook page in support of CCF with some wonderful Cheetah Photos, and news from CCF

https://www.facebook.com/#!/savethecheetah
The photos are really worth looking at
WS
_________________
If I can make somebody smile, my day has been worthwhile