As I have now hopefully conquered the problem of how to download a photo, I will now try to post some photos and details of my recent trip to the Mara. It was my first visit to the Mara but not Kenya, having been to Meru National Park on several occasions. I stayed at Offbeat Safaris Mara Camp, a small 6 tent camp in the Mara North Conservancy just outside the main reserve. I stayed for 7 nights from the 2nd. June. The camp had been closed for April and May because of the long rains and I was the first and only guest staying at the camp for the start of the new season. This meant I had the luxury of a vehicle all to myself plus the services of 3 superb Masai guides, David, Bernard and Kaapen. The majority of the game drives were within the Conservancy with the occasional foray into the Mara Reserve.
As the rains had been very good this year the grass was exceedingly long making game viewing challenging but very rewarding. On our first visit into the Mara Reserve crossing the Musiara Marsh area we had a brief glimpse of the 'Four Musketeers' male lions who had recently taken over the running of the Marsh Pride from Romeo and Clawed (Claude!). (I will post some photos of these guys on a later thread as we had another encounter with them on a second visit) The sighting was not great due to the very long grass and the sudden arrival of half-a-dozen Governors Camp vehicles. Driving further into the reserve across Paradise Plain (I think) we were looking for a likely spot to park up and have some breakfast. Spying a suitable tree in the distance we headed towards it. To our surprise however it was already occupied by a lioness and her cub relaxing on one of the branches half way up the tree. The lions were Nyota and her cub Moja the 'Stars' of the BBC t.v. series Planet Earth Live. Nyota is fairly easy to recognise as she has a rather well chewed left ear. They were both very relaxed and completely ignored us apart from the occasional raised eyelid. They were obviously well used to all the attention from their time with the t.v. crew. The bonus was that we had them all to ourselves, no other vehicles anywhere around. We spent about 20 mins. with them watching and photographing them before leaving them in peace and heading out for another suitable spot for breakfast!
It was a great sighting and very lucky sighting, if they had not been in the tree we would never have seen them, they would have been hidden in the long grass.
Fingers crossed now for the difficult bit!! 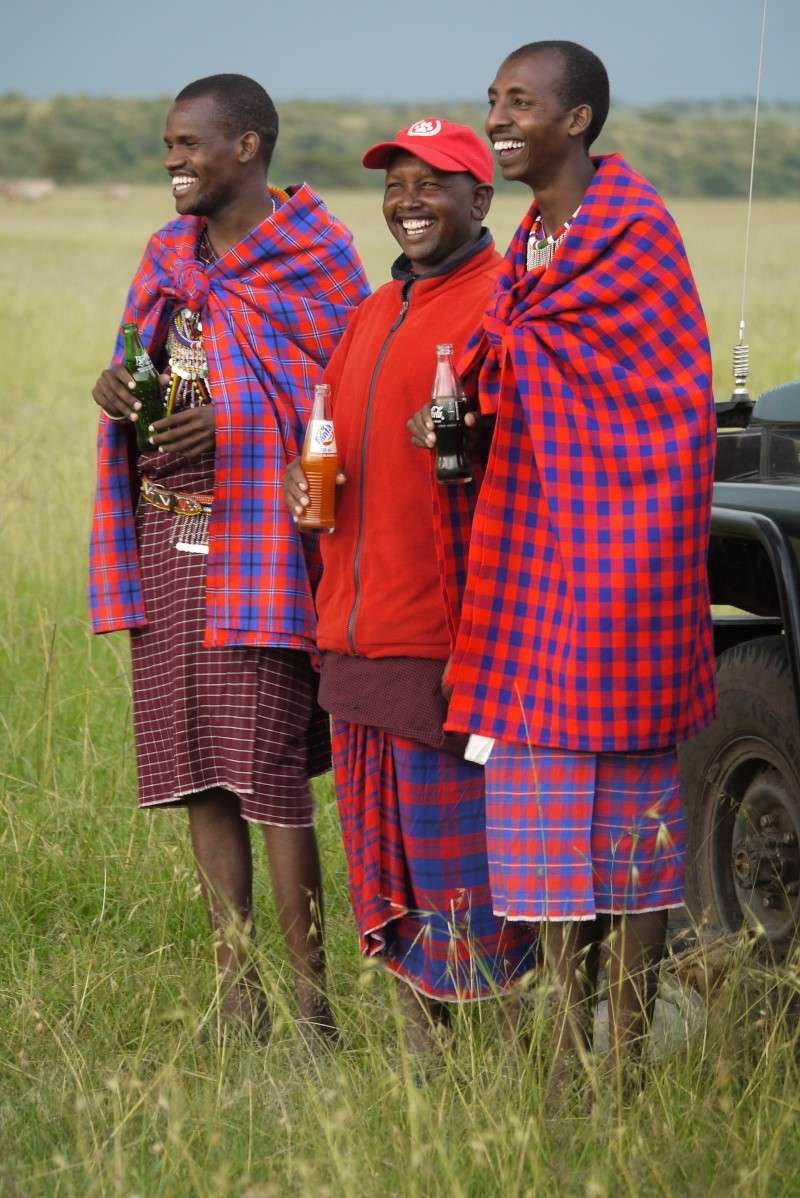 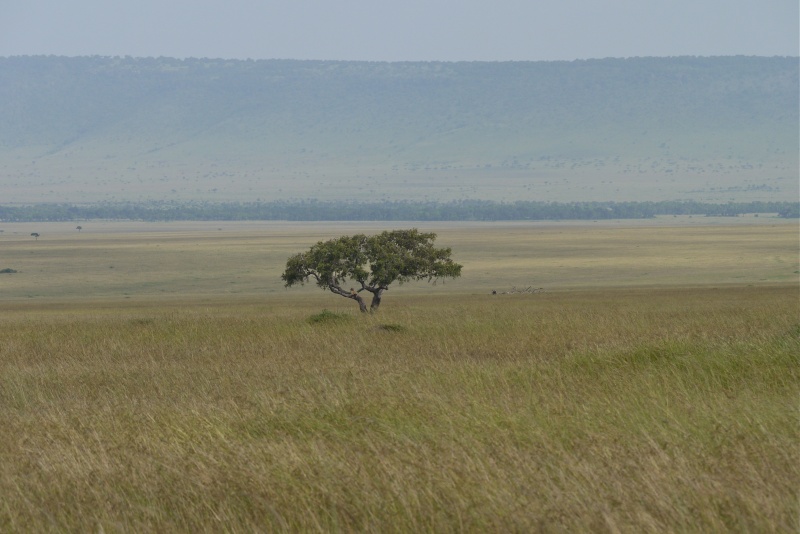 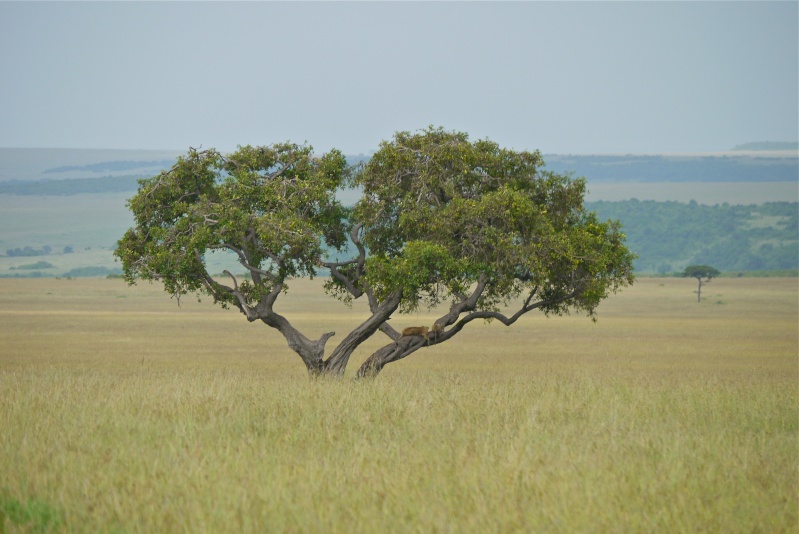 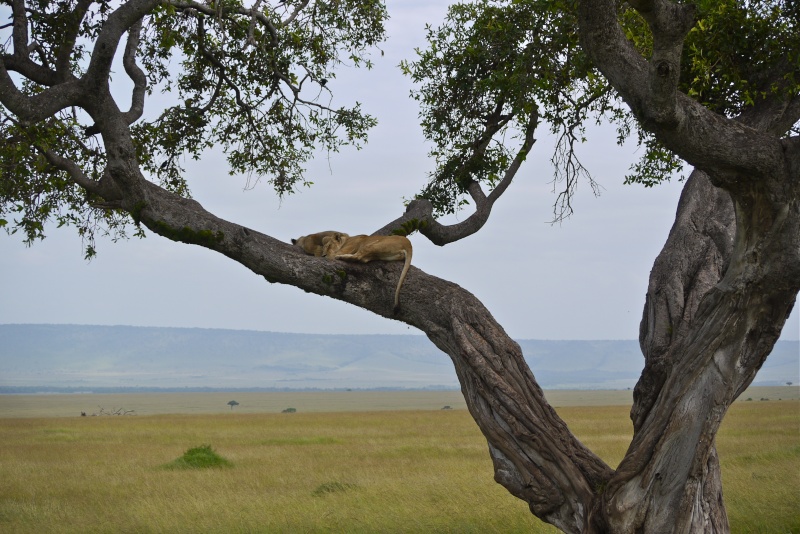 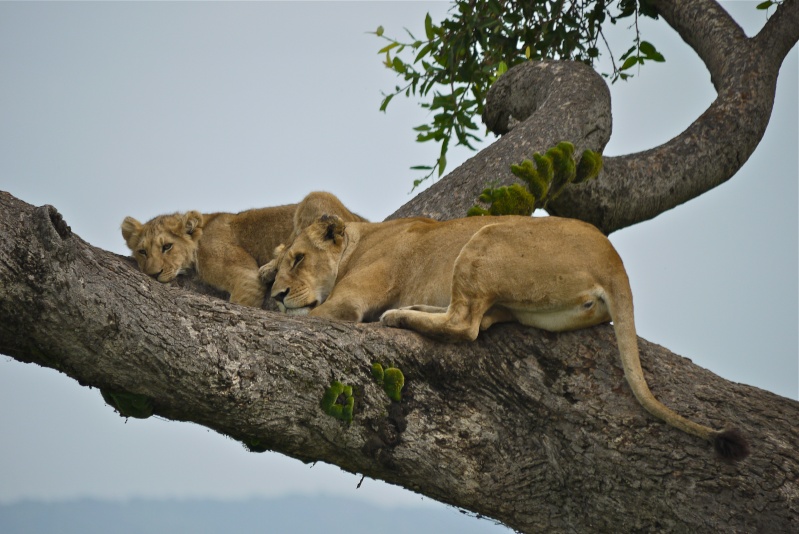 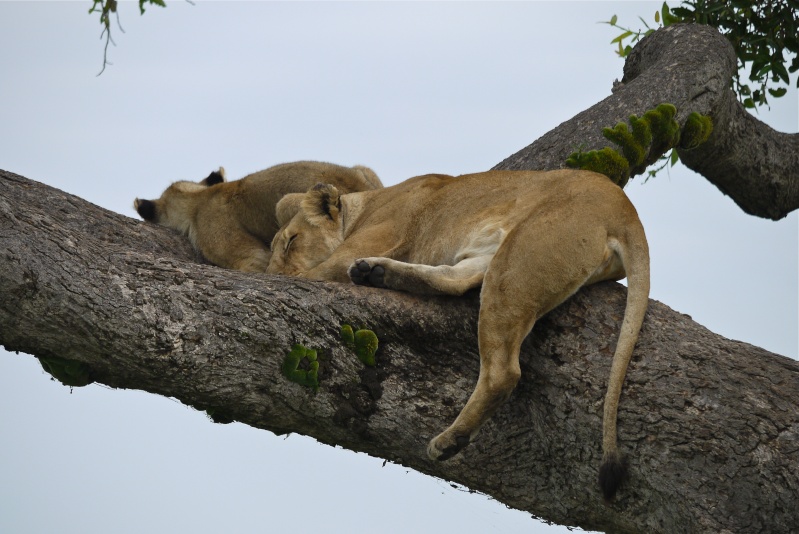 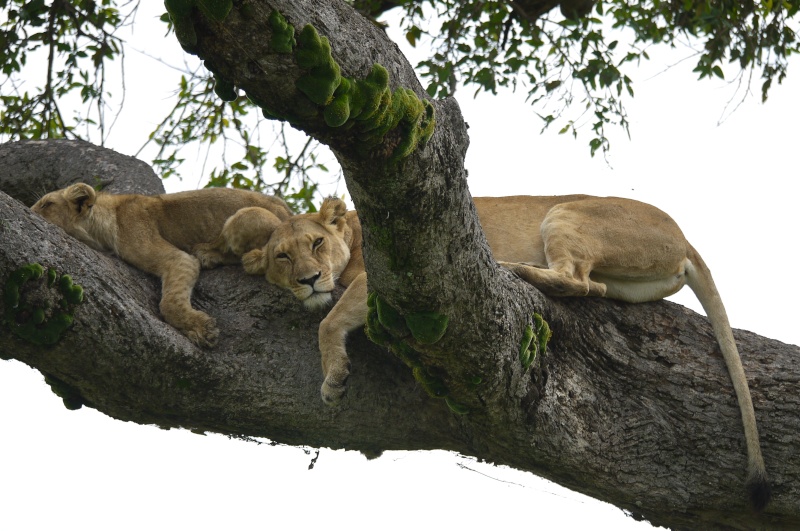 Better get ready for another photoshoot 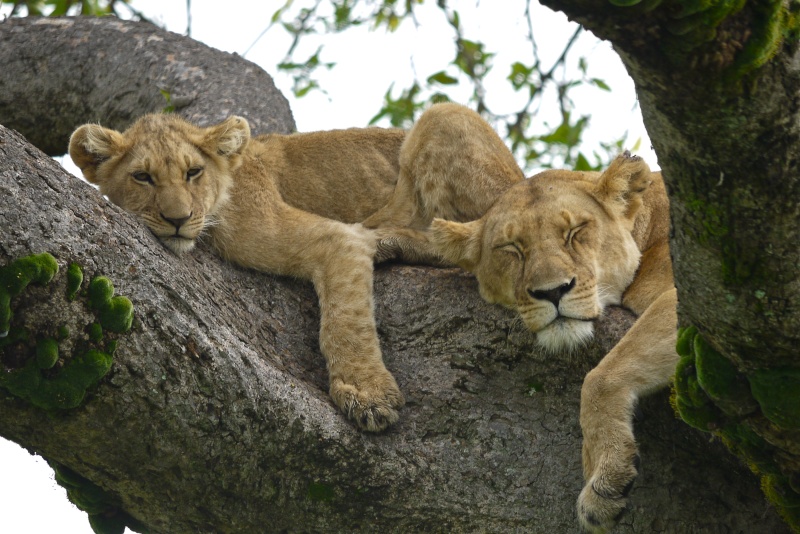 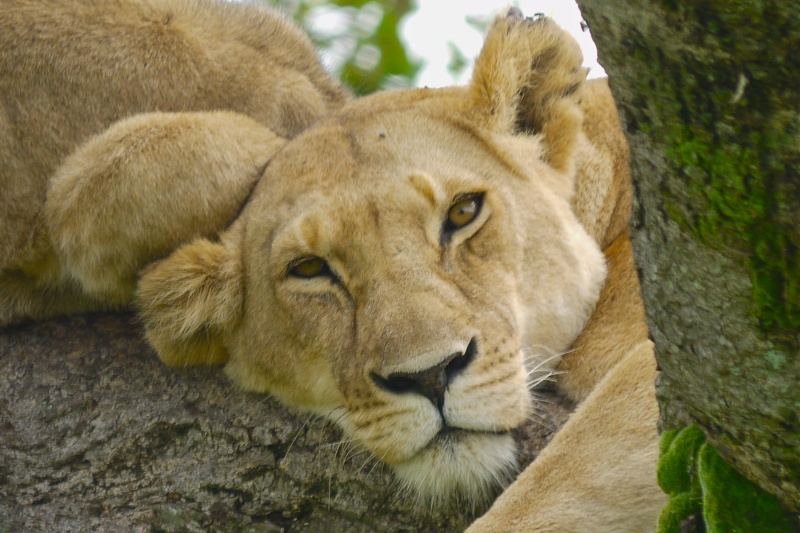 It seems to have worked, thanks guys for all your help!!

Safariman those are BRILLIANT, and well worth the wait, to see Nyota, and Moja. Really great shots, as you got closer, and closer. The close ups of them both in the tree are fantastic, and its really good to see them again, after PEL, it makes a big difference that we can still follow their lives after seeing them on PEL, as you wonder what happens to them after the programe finishes. It's also nice to read your experiences of the events leading upto spotting them, and to hear about your Guides who seem to have done such a good job of looking after you.
Thank you so much for sharing your Safari trip with us, you've really made my day
Thanks Safariman
WS

Before I comment on your wonderful photos Safariman I am just so excited that you met Kaapen - I used to do riding safaris, tented and always on the move and Kapeen was the most brilliant guide, he was always there with a Tusker when I got off my horse. He doesn't ride but is such a wonderful person, can spot anything 5 miles away and his wife makes lovely jewellery. He works for Offbeat now and Piers Winkworth and Tristan (don't know if you met them). That's just made my day seeing his photo. Wow, what a small world.

Just brilliant photos Safariman - how wonderful to see Nyota and Moja up the tree looking so chilled.

Lai
Glad you enjoyed the photos. Yes Kaapen is a really nice guy and a great guide, I also met his wife (no2). I do know Piers Winkworth, he was hosting the Offbeat Mara Camp while I was staying there. I first met him a couple of years ago when I stayed at Offbeats Camp in Meru National Park where I have been back several times. Piers has always made the effort to come and be at the camp when I am staying there and we have become good friends. You should check-out the Offbeat Safaris Facebook page.
Safariman

Oh Wow! Lovely pics of two very gorgeous lions! I'm so glad all the issues have been worked out, I knew the photos would be well worth the effort but Moja and Nyota! So wonderful to hear and see these two still doing well! Thanks so much Safariman, looking very forward to the rest of the photos you share. Thanks so much!

hearing about your experience and they way you described it was just amazing, you have a little flare for writing there safariman

Just magic to see Nyota and Moja and your photo's of them are superb and I loved the teasing of getting closer and closer, aren't they just two very special lions and your camera skills are pretty special too I think.
Loving the photo of the three guides and how weird that you and Lai both Know Kaapen, as Lai says, small world.
I am so glad the picture posting got sorted as we would surely have missed out on something very special and I bet you have loads more stories and pictures that we would all love to see.
Some of us on here have been on safari and others not so lucky, so for us to hear about your experiences and see all the wonderful photos is a real treat.
Thanks for sharing those safariman

It's one I follow Safariman. I met Piers years ago on my first riding safari when he was working for Tristan, he rode with us everyday and was great fun. I've done a couple of safaris with him. Lots of stories from around the campfire and far too many sundowners!!!

Statistic. This thread has been viewed 71 times in the last 6 days
WS

After the sadness following the story of those three cheetah cubs and the death of one of Honeys Boys, what a refreshing and heartwarming set of photos! I just loved following their story on PEL and I'm so glad someone has seen them since! :) 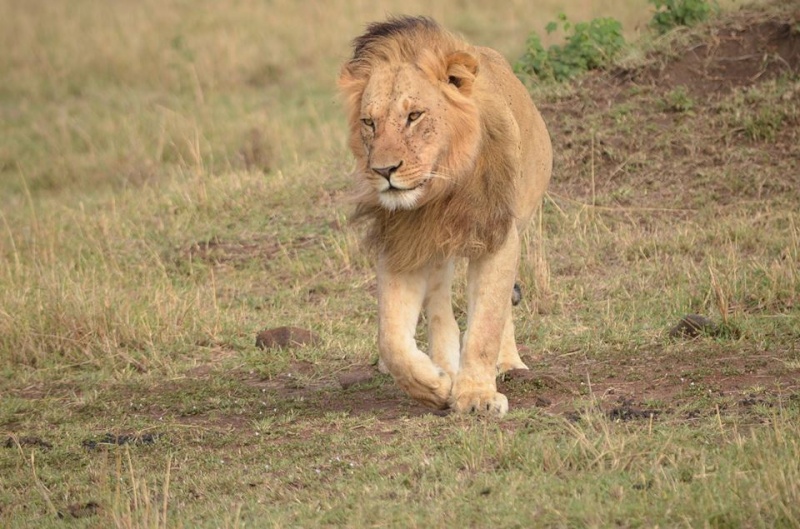 Moja, a famous lion from Planet Earth Live 2012 Edition.
He looks like he will have super big black mane just like his brother Mohican. 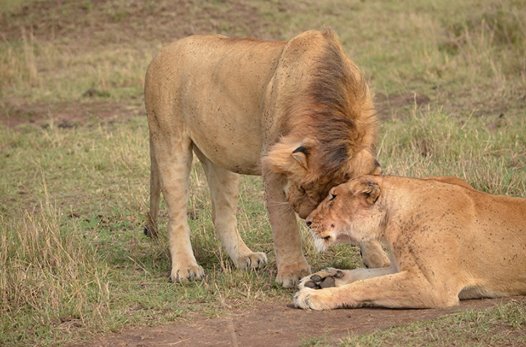