Bears of Many Colours

Wild About Animals :: Bears of Many Colours

Bears of Many Colours

Did you know there are 8 different species of bear?

... add to this list their sub-species and there are a lot of bears around the world to see!!

Probably the most diverse coloured bear is the American black bear... as well as the obvious black colour, there are cinnamon, chocolate brown and white versions! And even those that are black can have white chest patches of various sizes and shapes. Something I learned recently is Black bears from different regions even have different shape faces!

I've lots to share on bears... but I'll wait until I can add some pictures too

We spent a week last September in the Great Bear Rainforest (Canada) looking for the elusive Spirit/Kermode (white) bear, it was the toughest wildlife trip we have done to date, lots of hiking along bear trails (great for bears, not so great for two legged people)... it rained every day... some days light rain, most days heavy rain, lol. But all of it was worth it when we finally got to see our Spirit Bear! I'm a crier when I see special animals (it's a girl thing) I just get really emotional, feeling really privileged/honoured to see them in their natural environment. This was certainly one of those moments.

This was our first glimpse of him... 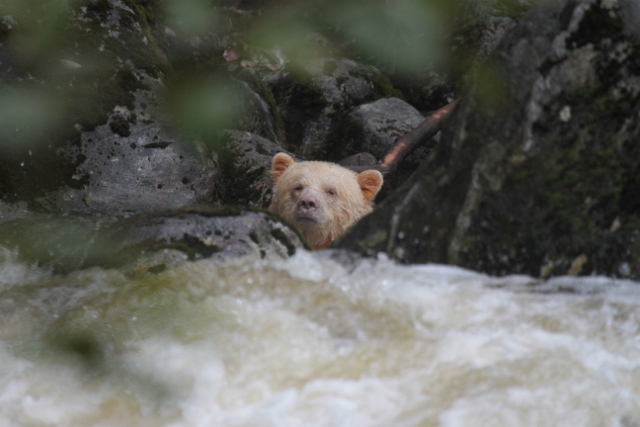 WMT - I am loving all your bear info. Can't wait for the pics as well.

Sorry I'm AWOL at the moment, issues with Broadband and work so I'll be back to normal soon

Liz for all of them, you learn something new every day

Well done for your perseverence in trying to see the Spirit Bear, worth all that time and effort in the end

Believe me, I get the 'girl' thing, I did the same when I saw Saba the Leopard (Olive's daughter) in the Mara last year for the 1st time !!!

Thanks Lai & Doogs, hopefully you won't get fed up with bear stories, pictures & videos... I have lots of them

Just love that photo of the Spirit Bear you've added to your post above. That must have been so really exciting that first glimpse, thanks for including it in the post. What species does the Spirit Bear come under ?

WS, it's a black bear... I'll write some more about him and other black bears when I get home from work tonight

Here is an awesome song about bears... we have been known to sing this one skipping along trails as our bear encounter deterrent song, 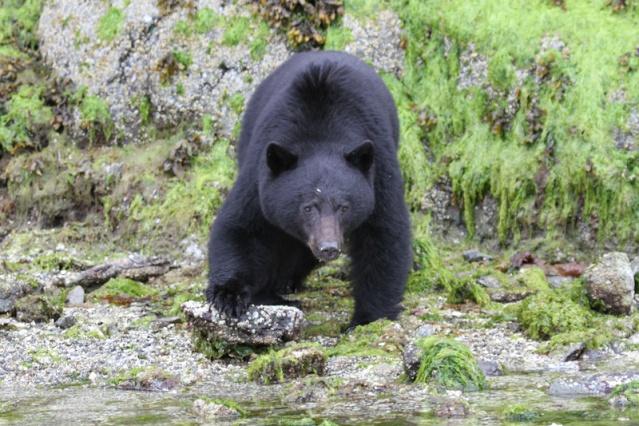 Cinnamon bear (Ursus americanus cinnamomum) found in the north-west of the USA, it has brown fur. Here's a picture we took of one in Yellowstone National Park.

Florida black bear (Ursus americanus floridanus) found in Florida, Alabama and southern Georgia, it has a light brown nose... and doesn't hibernate in the winter (pregnant sows and with yearlings do though). We are hoping to spot a Florida bear this winter when we visit Florida over Christmas.

Kermode or Spirit bear (Ursus americanus kermodei) found on the central coast of British Columbia, it has a white/cream coat which is caused by a recessive gene (similar to how some people are born with ginger hair). We saw this very special bear in the Great Bear Rainforest last September. 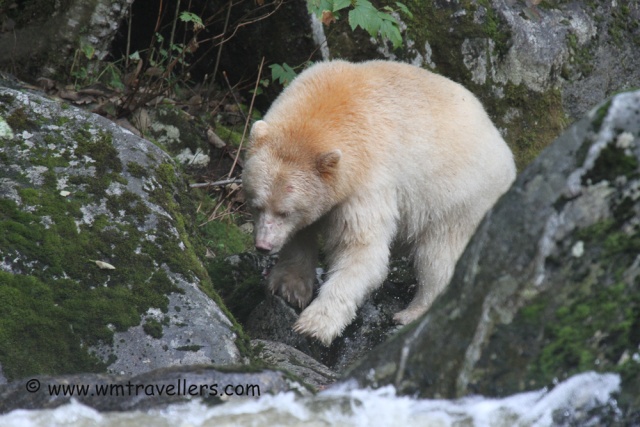 The average life span of a black bear is 18 years, with the oldest recorded wild black bear being 31 years old.

Black bears usually breed in June or July, the fertilised egg does not implant in the bear's womb until November with the gestation period lasting 235 days. The sow gives birth in January/February, to between 1 and 6 cubs. They will stay with their mum for approximately 18 months, when she will push them away to mate again. 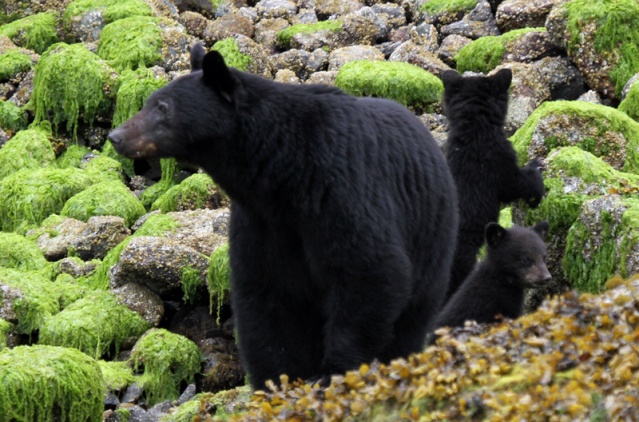 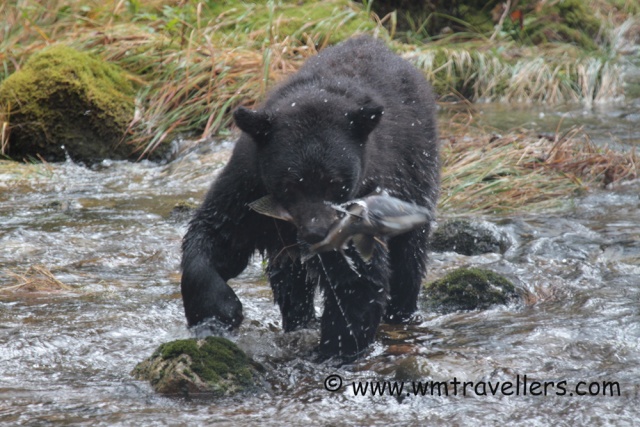 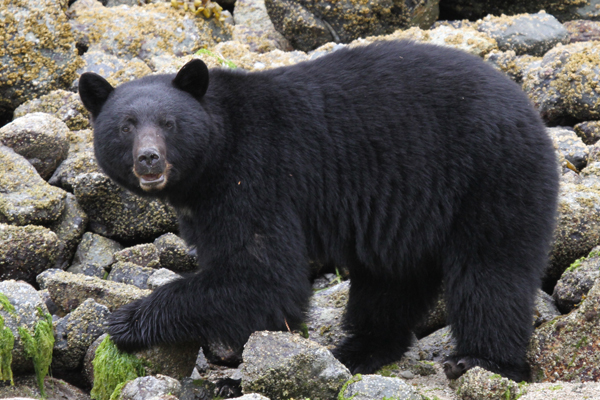 Here's one of our videos of a Cinnamon Black Bear in Yellowstone National Park. We watched him from the side of the road (out of the car) along with a small group of other people that had spotted him too.

I haven't heard of the Kermode Bear, but the name Spirit Bear does ring a bell from somewhere. I'd also not heard of the Cinnamon Bear, and didn't realise there was so many subspecies of Black Bears thanks for the information Liz. Great photos, and Video, I wonder what made the Cinnamon Bear jump like it did, it looked like it had been stung by something. Not a good idea to make a Bear angry

we often see bears jumping like that, I think it's when they hear something they're not sure about, they are looking around and getting ready to run away from the danger. Funny thing is they are usually looking away from where we are so I believe it's other animals they are listening out for.

This time last year Mr WMT and I visited the Great Bear Rainforest in search of the elusive Spirit Bear... 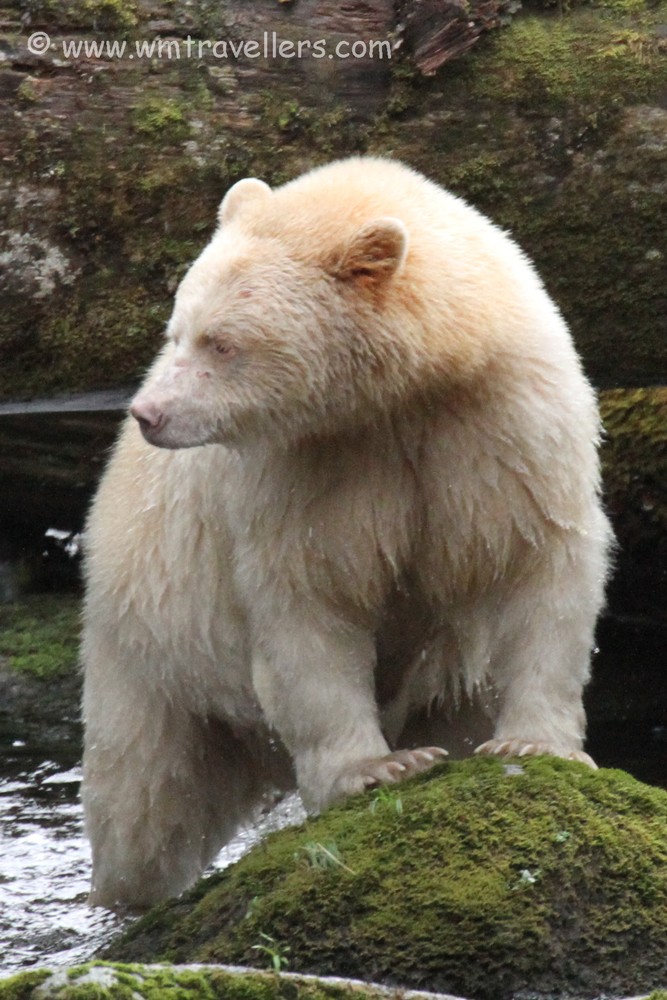 You can read our story here:

WMT Team
That Video is absolutely superb BRILLIANT. Guys if you watch this then please watch it in Full Screen it deserves to be watched that way, that is also a fantastic photo. Will catch your with your trip later.

WMT that's a lovely clip and photo of the Spirit bear, lucky you to have spent time with him.

Thanks WS & Lia, I've been really busy with work lately, so haven't had much time to post (we are off to Chile and Easter Island on 18th October, so even more long hours at work are on the cards). When we get back (early November) I'll add some pics and video of Brown bears

Sorry Liz, I've been slacking on all your posts

Thanks for all the pictures, vidoes and information regarding the various bears, you really do know your stuff and it's obvious you have a huge passion for these wonderful animals.

Had a wee giggle

at Cinnamon getting 'spooked' !

re your Spirit Bear video, it's brilliant and what a thrill seeing him so close

Chile and Easter Island sound great, only just over 2 weeks until your off

Sounds like another great trip coming up Chile and Easter Island, and not long to go either. Hopefully sounds like more great pics, and info. We all lead busy lives, so don't worry about being missing. I shared your Spirit Bear Video on Ustream chat that hosts many of the web cams I watch, most of the chatters are from USA, California, and Canada, they were absolutely thrilled to see the your video, and asked me to pass on their thanks for sharing it

fantastic, we'll really look forward to all your photos and clips.

Time to add in Brown Bears!

I'm sure you know... but just in case you didn't... Grizzly Bears, Kodiak Bears and European Brown Bears are all part of the Brown Bear species. They can range from as little as 80kg all the way up to a massive 680kg! They have very similar breeding patterns as North American Black Bears and will normally have two to three cubs born while they are in their dens in the winter. Cubs will usually stay with their mothers for just under two years when she will look for a new mate and push her little ones away. Again, their diets are similar to Black Bears, eating grass, berries, little critters (bugs and small mammals), fish and larger mammals (they will hunt deer and bison calves). They can run 30 mph in a short burst... so best not to try and out run one

. The smaller brown bears can climb trees but the heavier they get the harder it is for them to climb... their claws are designed for digging rather than climbing, hence their hump on their back, which is muscle that powers their digging. And what are they digging for, why, those little critters!

Here are a few of our brown bear pics and a couple of videos... 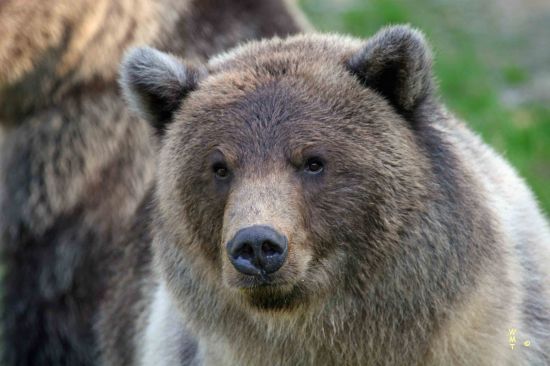 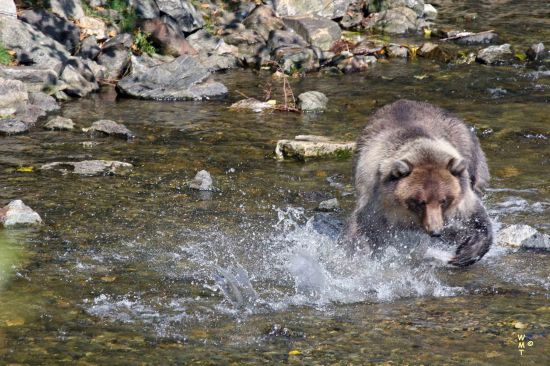 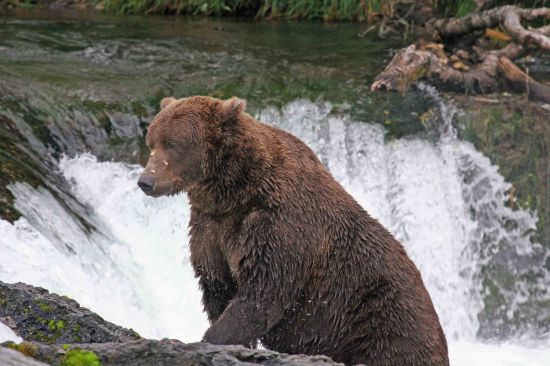 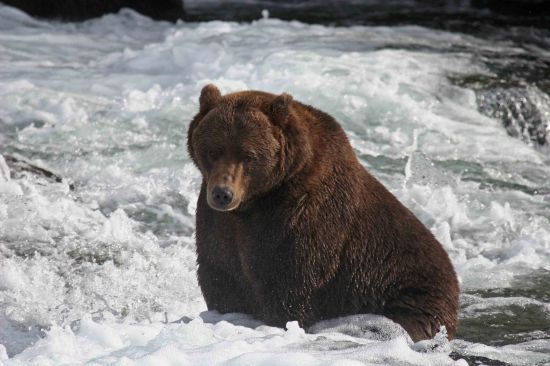 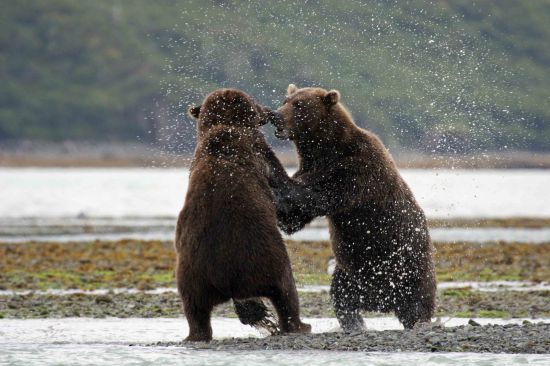 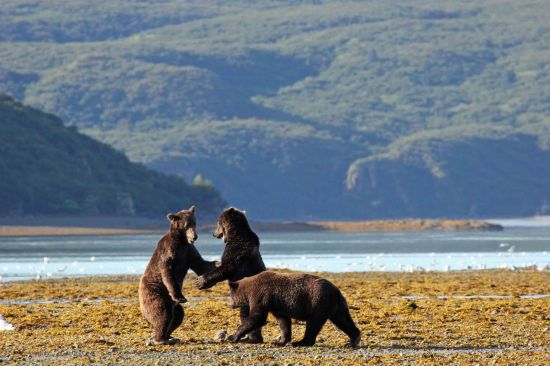 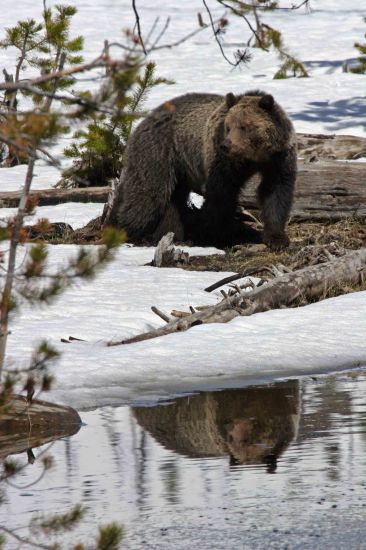 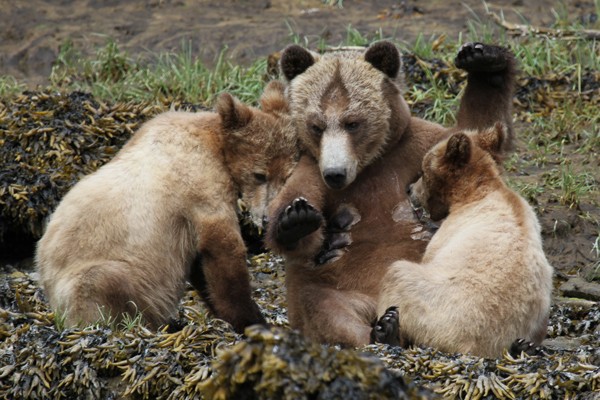 Thanks for the info WMT, I love the name Kodiak to me it gives an impression of power. It's amazing how many subspecies there are really, I've noticed on docmentaries I've see that its a real advantage for the Black Bears especially the cubs that they can get out of the road of the Grizzly's, and be relatively safe up a tree. Great photos, and videos, I know that the angle on the video shortens the distance, but that still looked close to a Bear that can run at 30mph

. Oh yes by the way recognised straight away

Little black bear cubs get themselves high up trees, often onto branches to avoid Grizzly bears and male black bears, the grown ups are much too heavy to climb so far up

Some wildlife viewing is best done in a group, it is really rare for a bear to attack a group of three or more people. The brown coastal bears are perfectly happy with people watching them feed on the beaches and will come quite close (too close for our camera lens!)

Kodiak bears live on Kodiak Island in Alaska, we visited the island when we went to Katmai National Park, but only used it as a base (not seeing the Kodiak bears). The Kodiaks are the largest brown bears, some as big as some polar bears! They have a very salmon rich diet that helps them get that big!

Wow WMT, I didn't realise that Kodiak Bears could grow as big as Polar Bears thats some size !. As you say it must be the rich Salmon diet. I'm sure I've seen where the Bears only eat one part of the fish, but I can't remember which part

WMT - sorry I'm a bit behind with all threads just now, lovely photos and clips and great information on the bears.

Wild About Animals :: Bears of Many Colours