As there is an extra day this year (29 Feb.) I thought it would give me a chance to post some photos of my recent trip to Delhi and Agra in India.

There is not much in the way off wildlife as the object of the trip was to see the wonderful Mughal architecture although I did have a chance to wander the markets of Old Delhi and Old Agra which was quite an experience in its' self. I did see the odd "sacred cow" wandering along the streets and a few water buffalo wallowing among the heaps of rotting garbage and surprisingly an elephant being ridden along an expressway in Delhi but the majority of the animals seen were of the human kind.

With India, what you see is what you get; take it or leave it and you have to accept it for what it is if you are to enjoy the experience. There is the contrast of the extreme wealth and opulence sitting next to squalor and abject poverty. But one of the things I noticed was in spite of these extremes everyone just gets on with their lives.

The following are a miscellaneous mix of some of the photos I have managed to sort and edit although I have yet to start going through the video clips.

The contrast in extremes I mentioned earlier!! 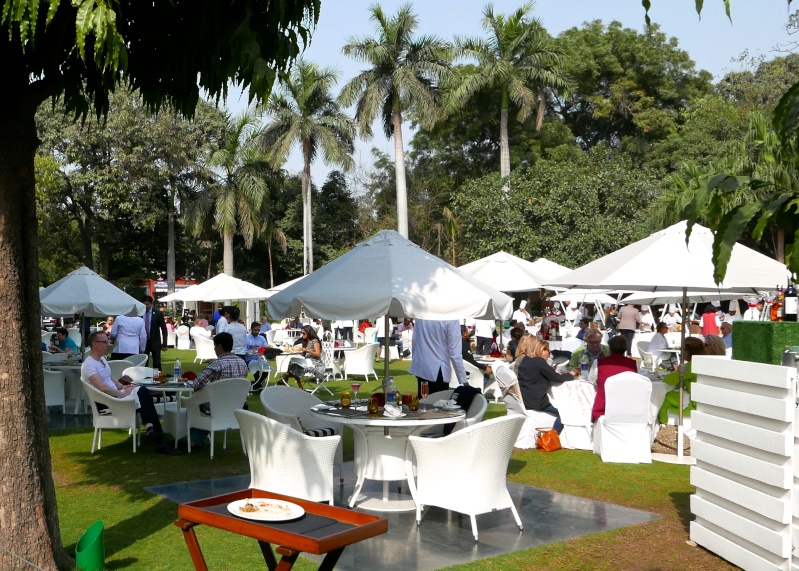 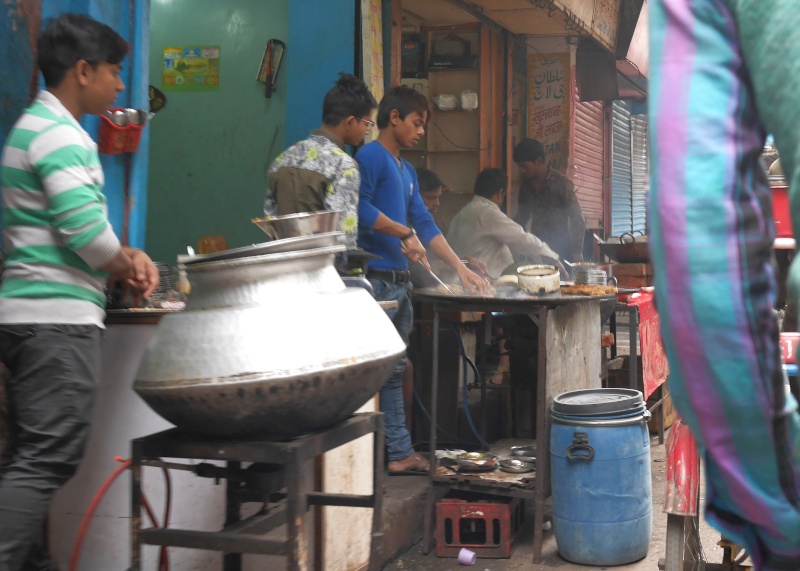 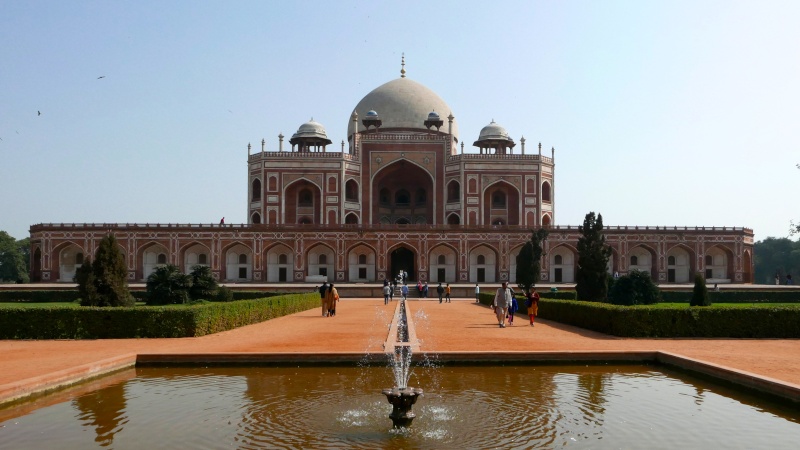 Humayun's Tomb,Delhi. This mid-16th century tomb is thought to be the template for the Taj Mahal 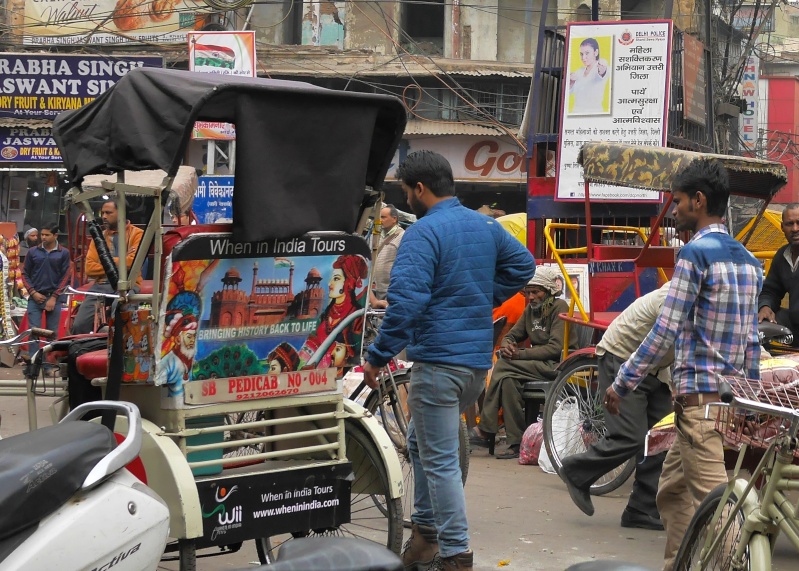 The entrepreneurial spirit is alive and well in Old Delhi as the humble cycle rickshaw is upgraded to a "Pedi-cab"!! 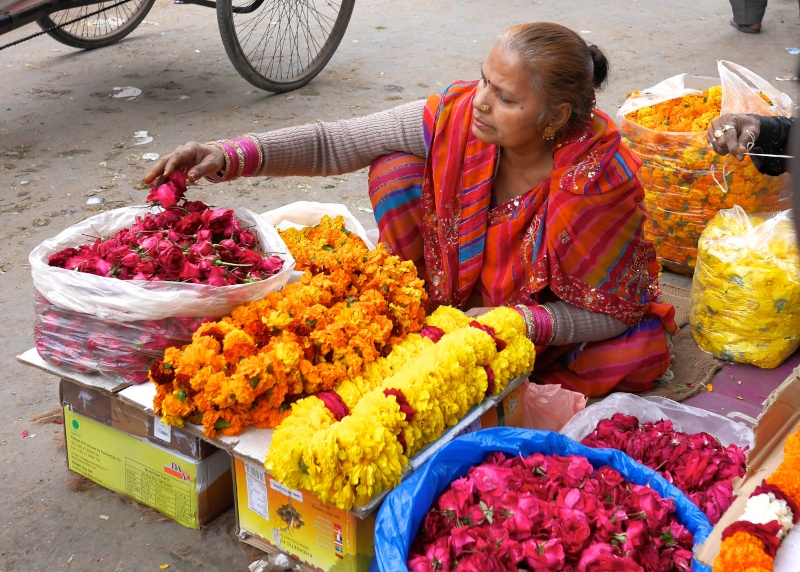 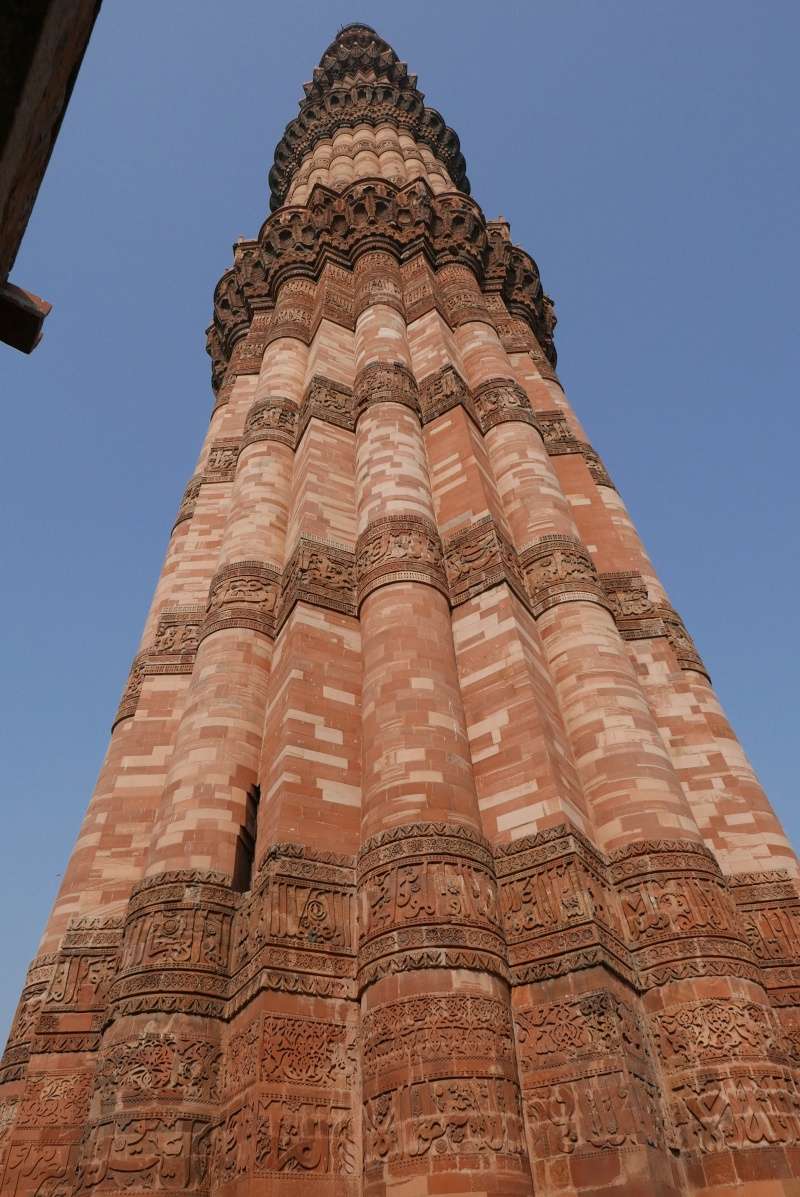 The incredible Qutb Minar tower. This 72 metre high tower was built in1193 and stands in  a complex on the outskirts of Delhi. 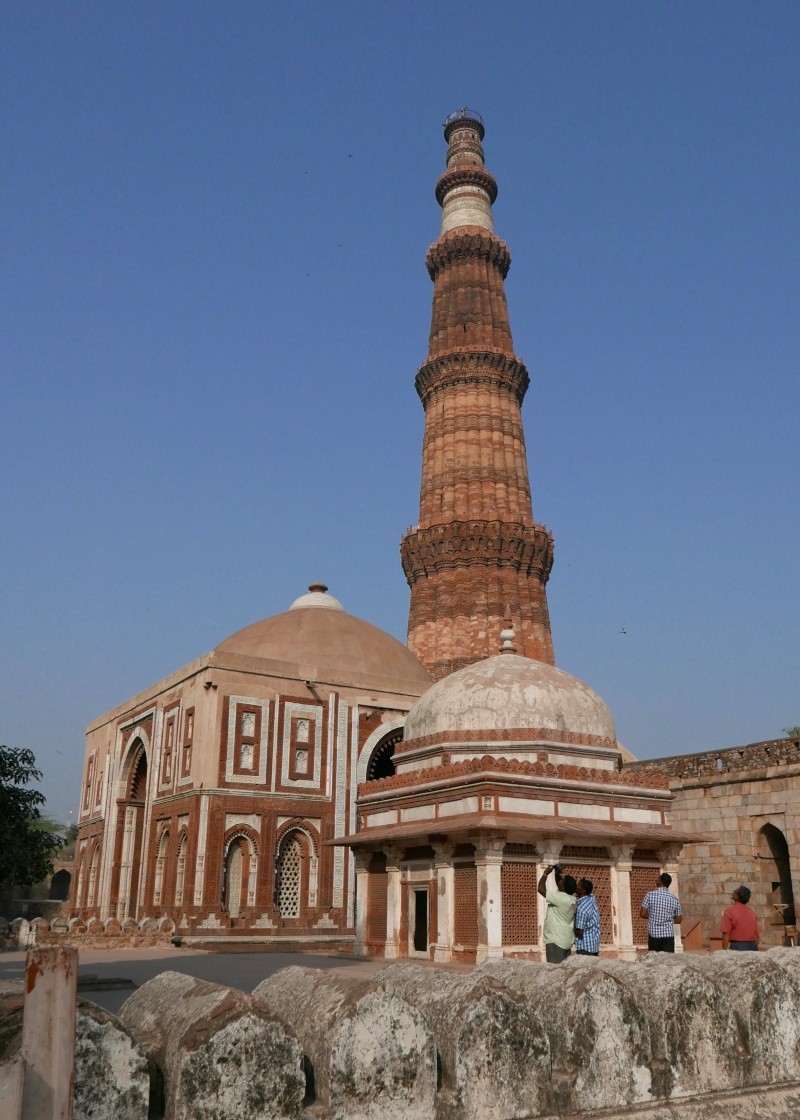 Another view of the tower with the Quwwat-ul-Islam mosque in the foreground. 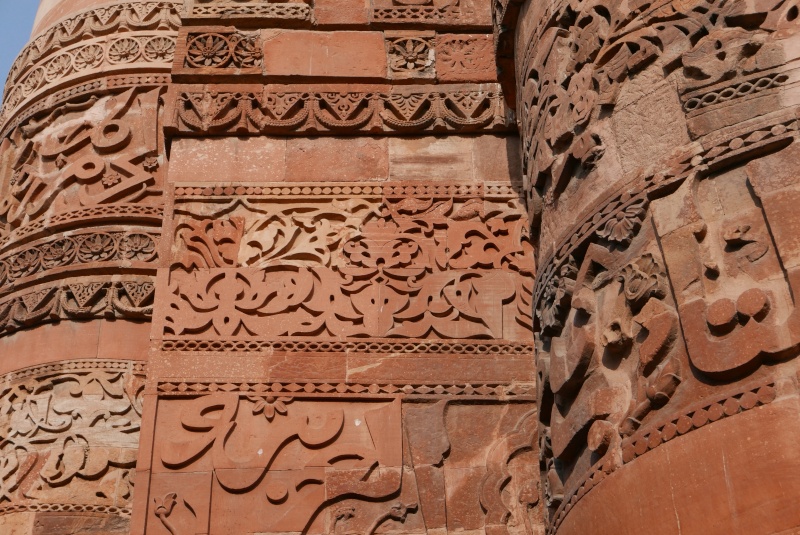 Some of the intricate Quranic red sandstone carving that surrounds the tower. 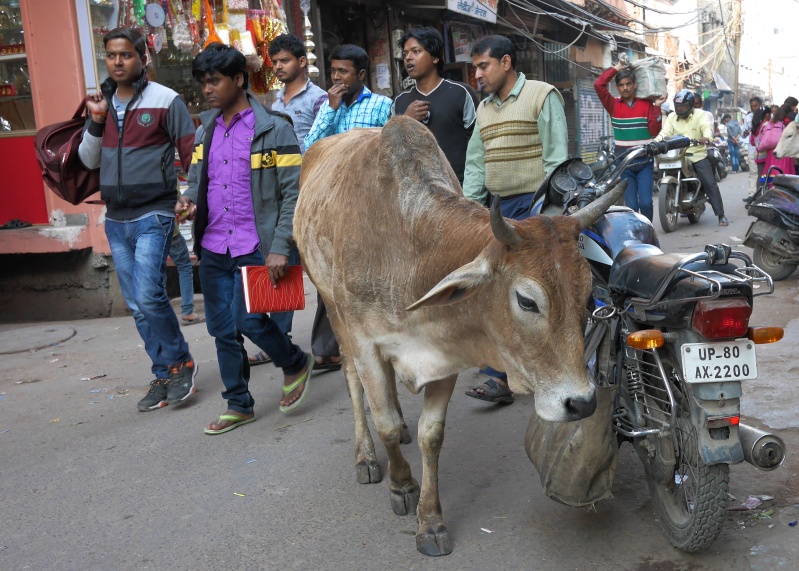 A "sacred cow" wandering through the street market of Old Agra. 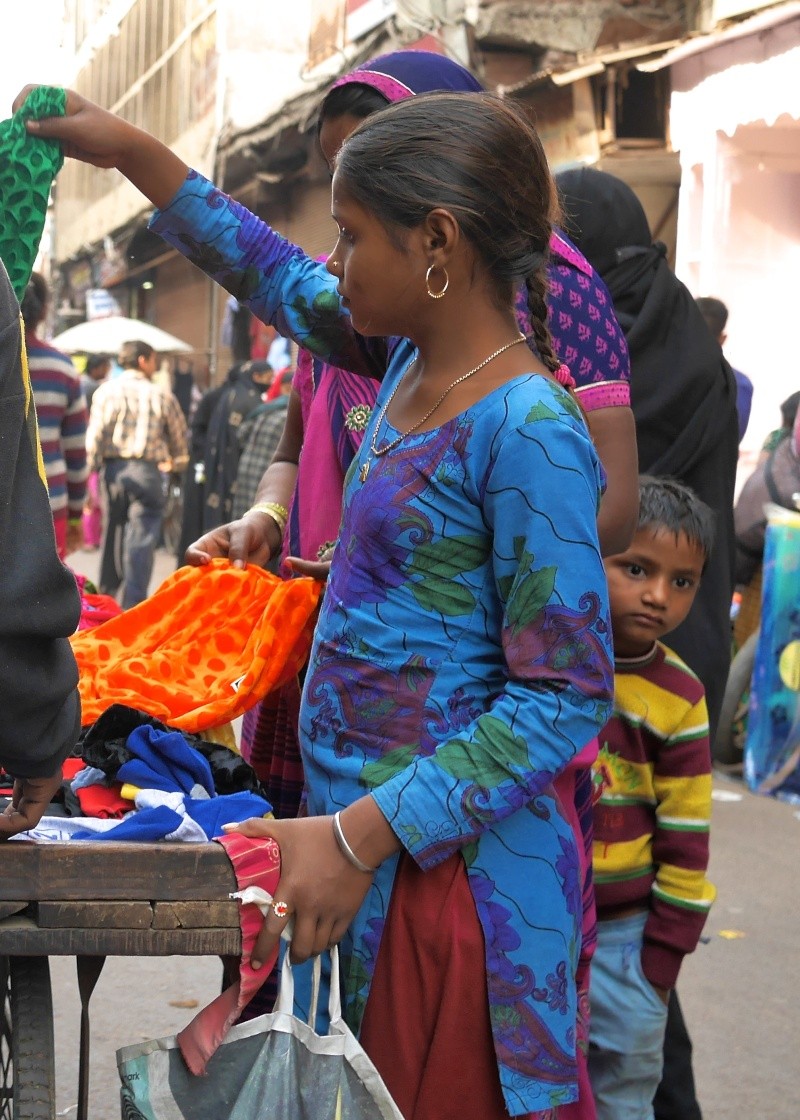 A young shopper at the Monday market, Old Agra 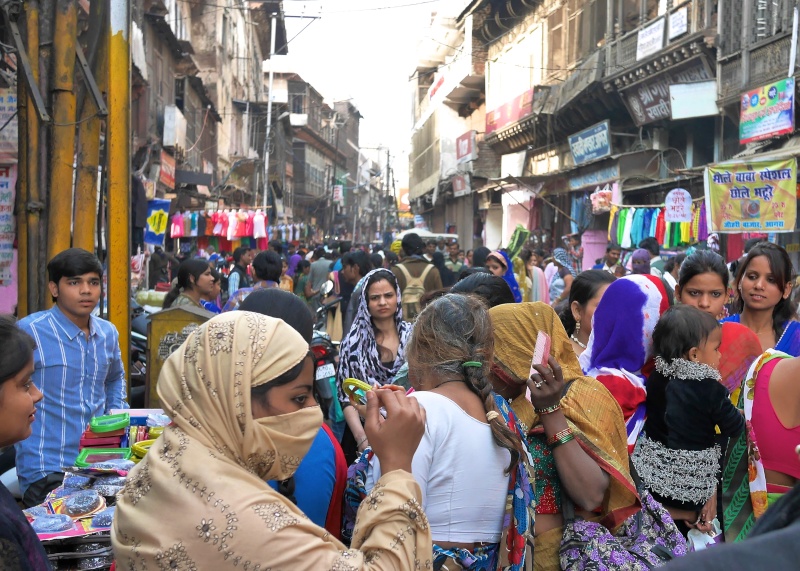 The street markets of both Old Agra and Old Delhi are a riot of colour, noise and smells. 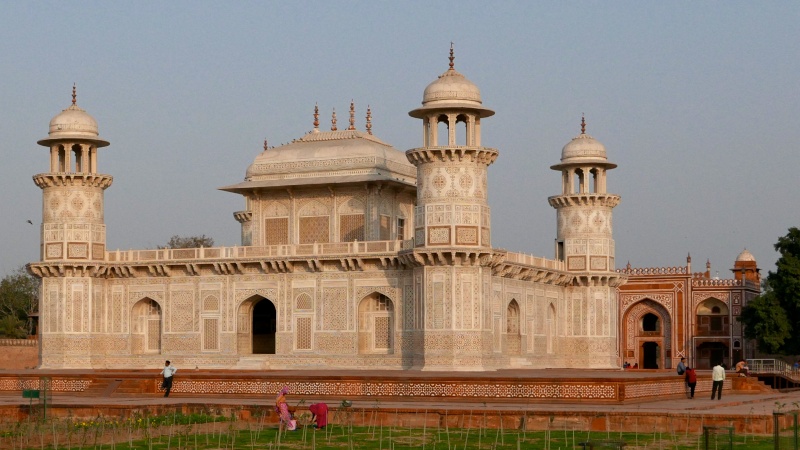 The Itimad-ud-Daulah tomb also known as the Baby Taj or Jewel Box. Built between 1622-1628 it was the first of the Mughal tombs to be entirely clad in marble. 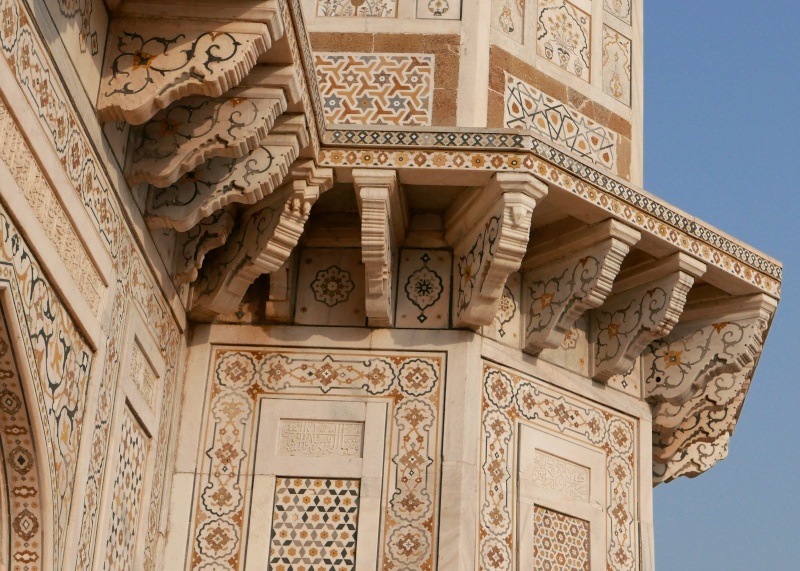 The tomb is covered in pietra dura inlay work where the marble is inlaid with semi-prescious stone. 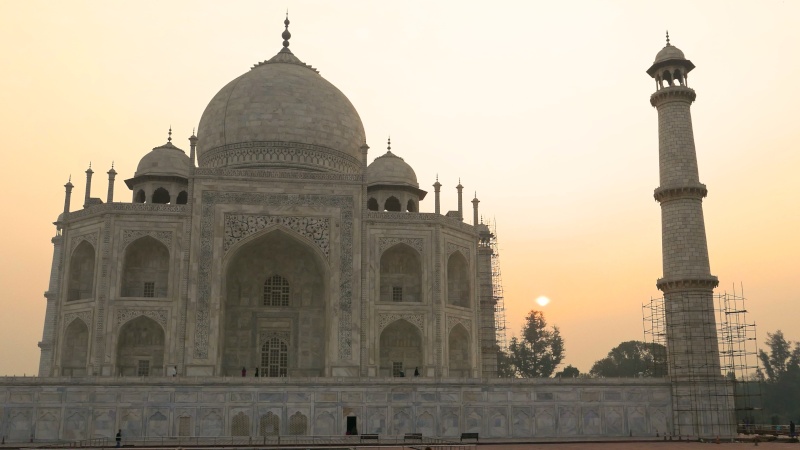 The Taj Mahal at sunrise. 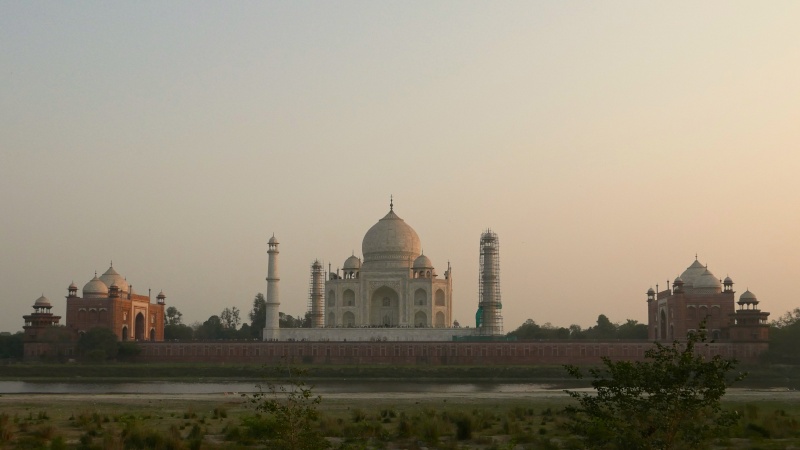 The Taj Mahal at sunset, seen from the Mehtab Bagh Gardens on the opposite bank of the Yamuna River 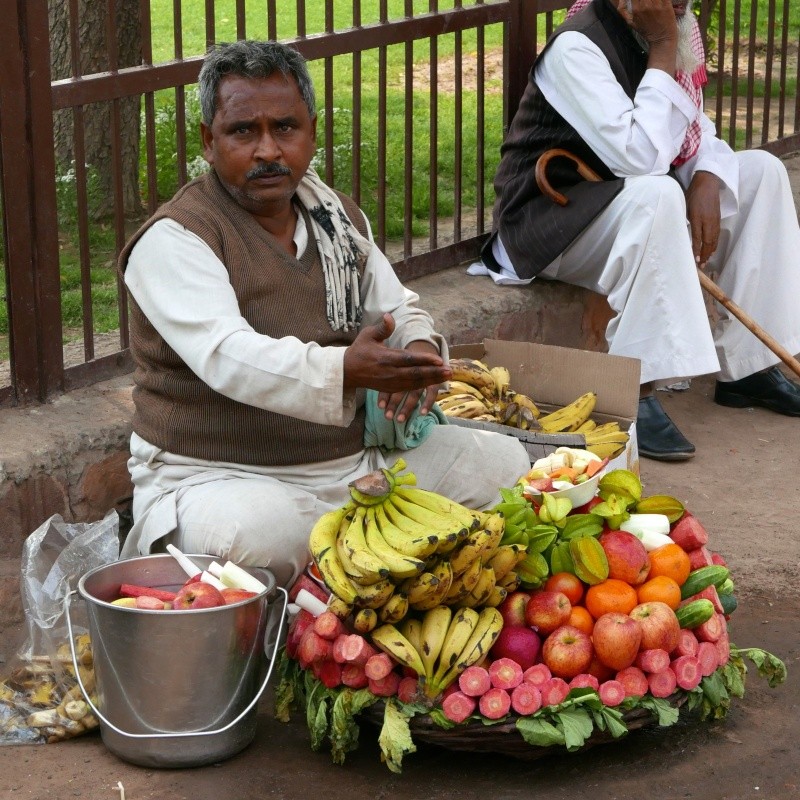 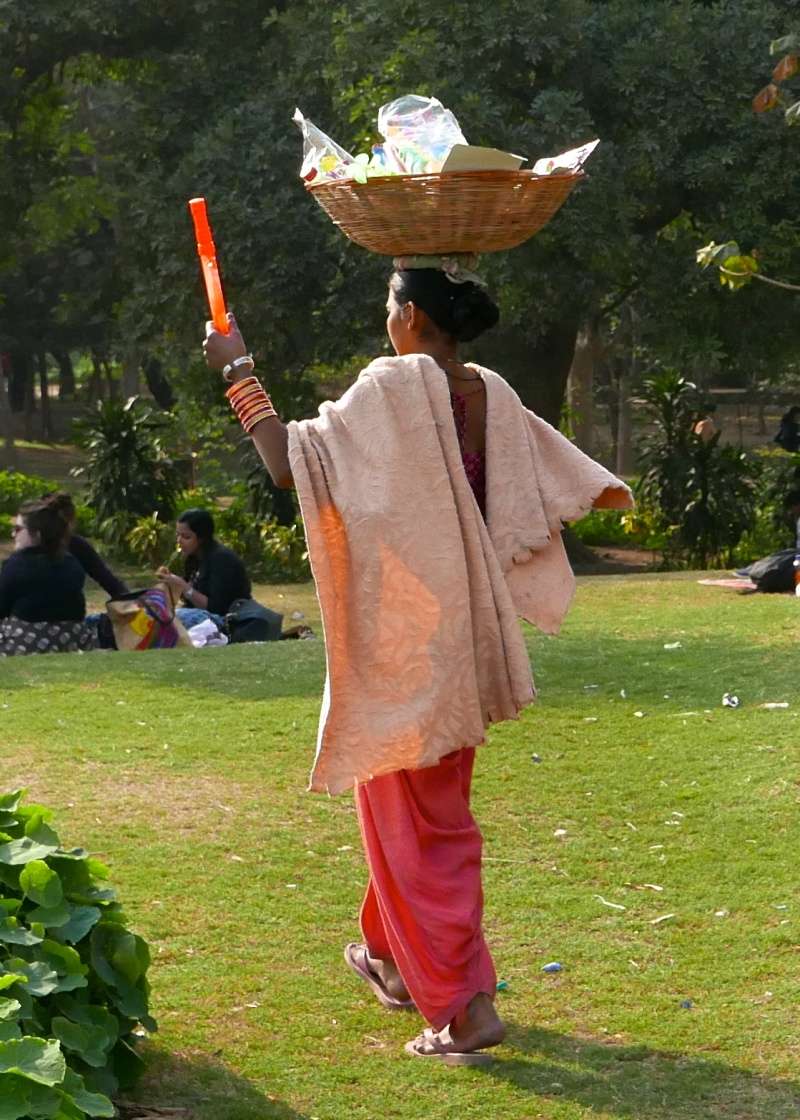 I will try and post some more photos as and when the editing progresses!!

I can certainly see the appeal of why you wanted to go for the architecture Safariman, there some really fantastic buildings with lots of history in your photos. It always amazes me how they built structures like the Qutb Minar tower all those years ago. You can certainly see the difference in the quality of peoples lives there, you would think living cheek by jowl there would be, more trouble. I no nothing about the Sacred Cows, are they owned, and are they allowed to wander around at will
Thanks for the photos, and description SM

The architecture is stunning Safariman, just beautiful and that's what Emma said when she was there in November, It's just amazing isn't it and your shots are brilliant. There is the extreme of wealth and poverty but that again is just what Emma found but she also said that everyone just seemed so happy and content with their lot. They seem to have a different acceptance than we do here. I'm sure there are people there that would love more wealth etc but Emma said it never came across. I don't know about you but she said that she felt very calm and settled there, even if she took out her yoga experience the whole ambiance of the place was calm and serene she felt. She is very keen to live there. The flowers heads are stunning colours and that fruit looks decidedly yummy.

I can't wait to see more and here your take on the atmosphere of India.

for sharing your photos Safariman. India is such a wonderful mix of vibrant colours, amazing smells (some not so good) and beautiful architecture. You've shown a great mix and I love the people shots as much as the magnificent buildings and temples. I see the Taj has some scaffolding now and I wonder how long that will be there for?

You must have had a fantastic time and a memorable holiday, I hope you didn't succumb to 'Delhi belly' ?

Thanks WS, LW and Lai. It was fun to try some different photography for a change although I find street photography quite a challenge. To try and capture people going about their everyday business without them realising that are being photographed is not always easy. I just tried to hold the camera at waist level and pressed the shutter on the hope principle that some will come out. I also didn't want to offend anybody who didn't want to be photographed. As you say Lai the streets are full of vibrant colour and are just asking to be photographed.

You soon realise that in India personal space is a lot less than in the UK, people are quite happy to be very close to others and the occasional pushing and shoving never leads to confrontation. People just get on with their daily lives. I suppose with such a vast population that is what you have to do to survive.

WS, the Qutb Tower is a very impressive piece of engineering, there is no mortar between the sandstone blocks they just rely on the accuracy of them fitting together. Also within the same complex is a much earlier iron pillar known as the Gupta Pillar. It is thought to have been made in the 4th. cent. AD and has survived 1600 years without rusting. Recent chemical tests have shown the iron to be 98% pure, something which even today is almost impossible to achieve. The abilities of past civilisations never fail to astound me, we are nowhere near as clever as we think we are!!
I have added a photo of the 7 metre high pillar below.

Not sure about the "sacred cows" WS, they just seem to wander about on their own and people and traffic just avoid them.They are sacred to the Hindu religion which is why you cannot get any beef in India.

Lai I managed to avoid the dreaded Delhi Belly, I was very careful with what I ate and ignored the temptation to try any street food.

The scaffolding at the Taj is for cleaning work on the minarets and will probably only be in place for a couple of months. I know that a major clean-up happened about a couple of years ago when President Obama was supposed to be visiting although he had to cancel at the last minute. 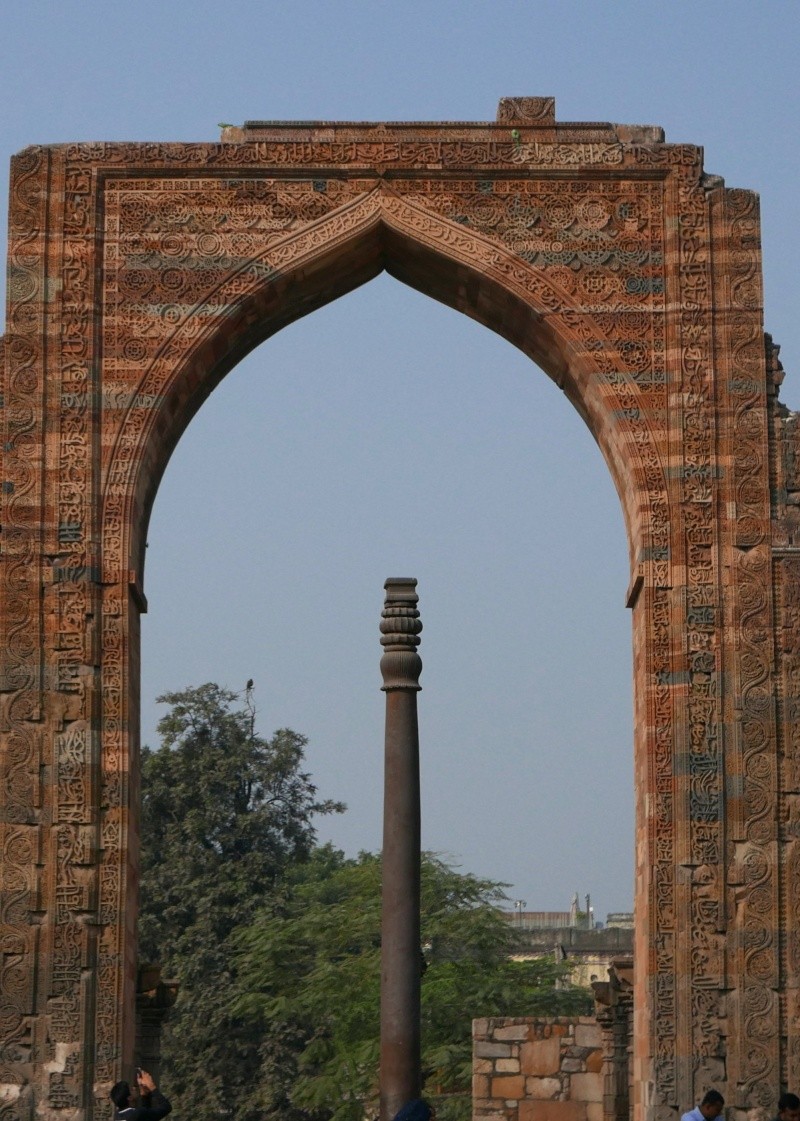 The Gupta iron pillar at the Qutb complex

Good to know you were okay Safariman, and love that last photo

Also pleased the Taj won't be scaffolded for too long, it's such a magical building.

98% pure I wouldn't have thought they would have had the knowledge to do that in that age, just goes to show we are not as advanced as we think we are. One of the problems of today is making stuff based on quantity, and cost, not on quality

It,s taken awhile but at long last I have managed to put together a video of the India trip. It took longer than expected mainly because the video has ended up a lot longer than I anticipated. It is about 9:30 in length and consequently I had to reduce the file size to be able to upload it to YouTube in a reasonable time so the quality is somewhat compromised.

Safariman, that was a wonderful compilation of clips which makes a fantastic video and a great memory of your trip to India.

Great to see so many lovely places, people, temples and fortresses - India really is remarkable.

You must have had fun putting it together despite YouTube!

Great video SM, and a great bit of editing, although saying bit, it must have taken you some time to do it. Love all the different architecture, and interior shots fascinating. The streets, and markets seem to be teeming with humanity, and of course that Sacred Cow wandering through the Monday market. Thanks Safariman I really enjoyed watching that

Thanks Lai and WS.

Yes it is fun putting the videos together but it is also very frustrating. Normally when I take a still photos I would take at least 6-8 shots of the same subject probably slightly changing the framing each time so that I have every angle covered. I can then compare them on the computer to determine which is best. However with video I normally only take one clip just as a back-up to the still photos but I often find when editing the video that I wished I had taken the clip from a slightly different angle or zoomed differently. Unfortunately it is then too late to do a retake so I have to make do with what I have taken. It can be somewhat frustrating but something I have to get used to.

Safariman, but that's the joy of photography!

Well that was worth the wait Safariman...........Fabulous for sure. The architecture is so stunning isn't it. It looks as though India has two sides to it...the serenity and the bustle.....I could take the serenity but not so much of the bustle and lack of personal space.

Thank you so much for taking the time and the effort to put that brilliant film together, I really enjoyed it