One of the great joys of staying at Offbeat Safaris' Mara Camp in the Mara North Conservancy is that it comes with its own private lion pride, the Offbeat Pride, along with exclusive access rights!! Under the agreement Piers the owner has with the local Masai landowners, there is an approx. 500 hectare exclusion zone around the camp within which only Offbeat Camp vehicles are allowed. This means vehicles from other camps are excluded and also the Masai cannot graze their cattle within the zone. The Mara North Conservancy has over 800 separate Masai owners, a lot of whom still graze their cattle within the conservancy. The Offbeat Pride territory is centred around the Camp which looks out onto Lion Hill, an area of thick bush and trees with rocky outcrops, where the pride spend much of their time.
The pride consists at the moment of 3 adult females, 2 sub-adult females and a 6 month old female cub. They are "serviced" by 3 males who spend their time moving between the Offbeat Pride and the next door Cheli Pride. During my stay the were mostly with the Cheli Pride which presumably has better looking girls!! One of the Offbeat adults was pregnant and about to give birth and was staying well hidden on Lion Hill. (She gave birth to 2 cubs probably while I was there but soon lost one and according to the latest reports the other is doing well). One of the sub-adults was also pregnant and is probably due to give birth anytime now. The 6 month old cub was one of a litter of 2, the other sadly being killed probably by hyenas, and the mother appeared to have lost interest in her and left her to her own devices. I only saw the mother once and that was at night when they were hunting. The cub had struck up a very close bond with her big sister, the non pregnant sub-adult, and they seemed to be inseparable, always together or with the little one trailing a few paces behind.
Within a few minutes of leaving camp on a game drive you could almost guarantee coming across a member of the pride and on one occasion early in the morning, the 2 young females with the cub in tow where about 300 metres from camp confronting a pair of old buffalo bulls. It was amusing to watch the standoff until the lions got bored and half-heartedly charged the buffalo who angrily ran off. The photos below show the very close bond between the cub and her sister. It was on an afternoon drive and there were 3 members of the pride and the cub relaxing in the sun. 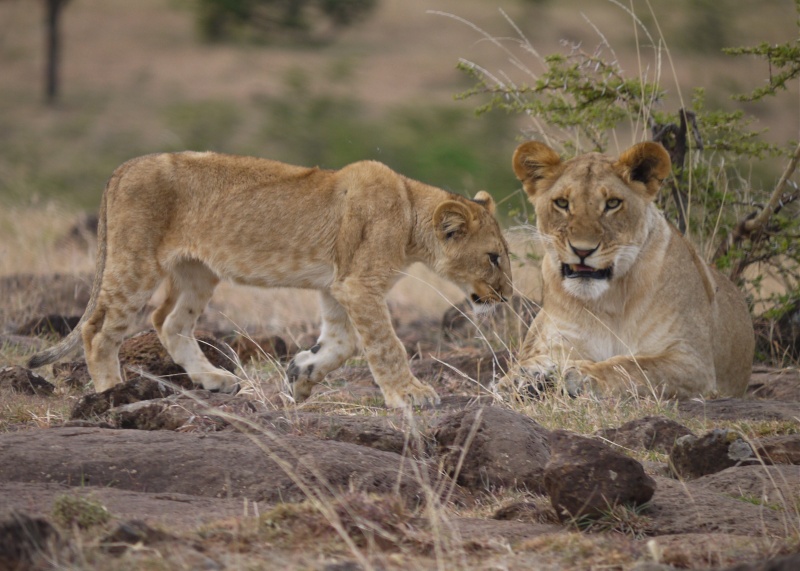 "Can I come and sit with you big sister?" 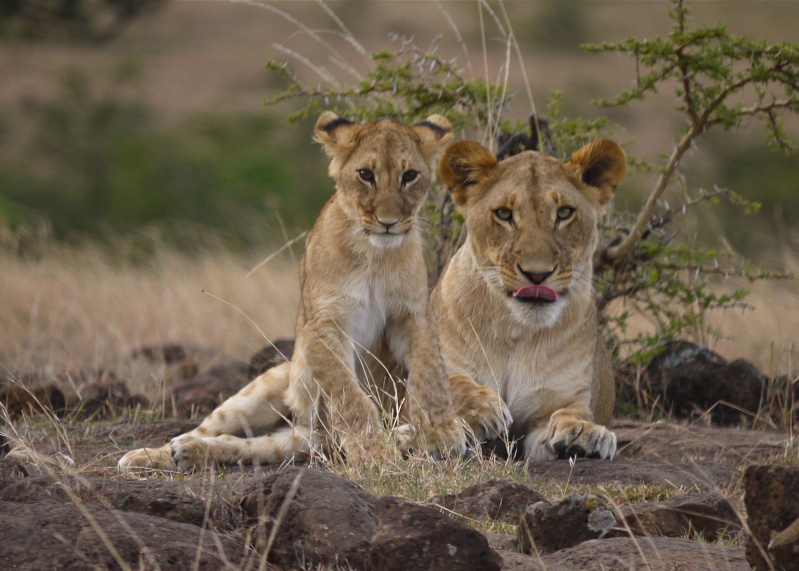 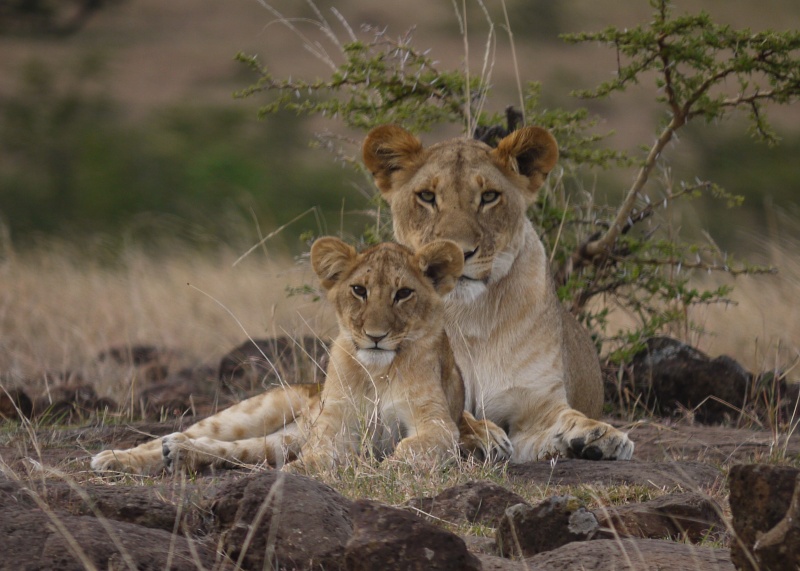 "Stay still while that funny man takes our picture" 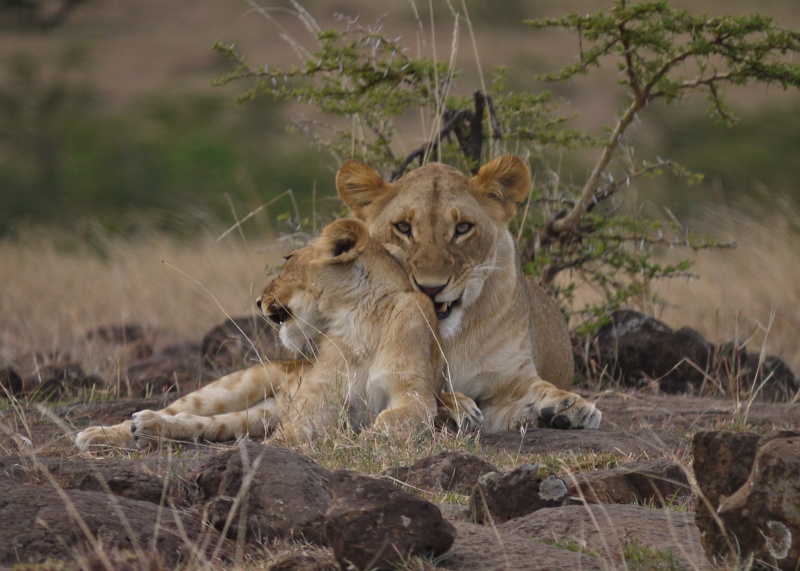 "its ok we can play now" 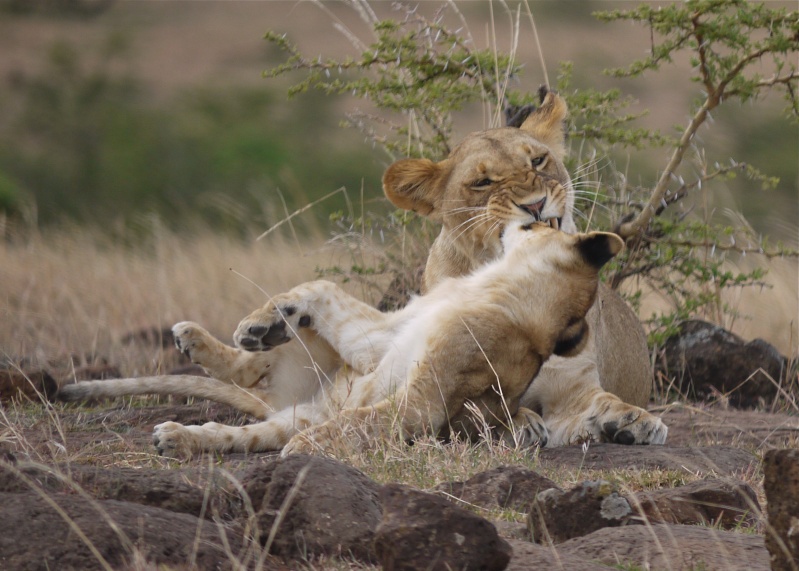 "Not too rough, I am only small" 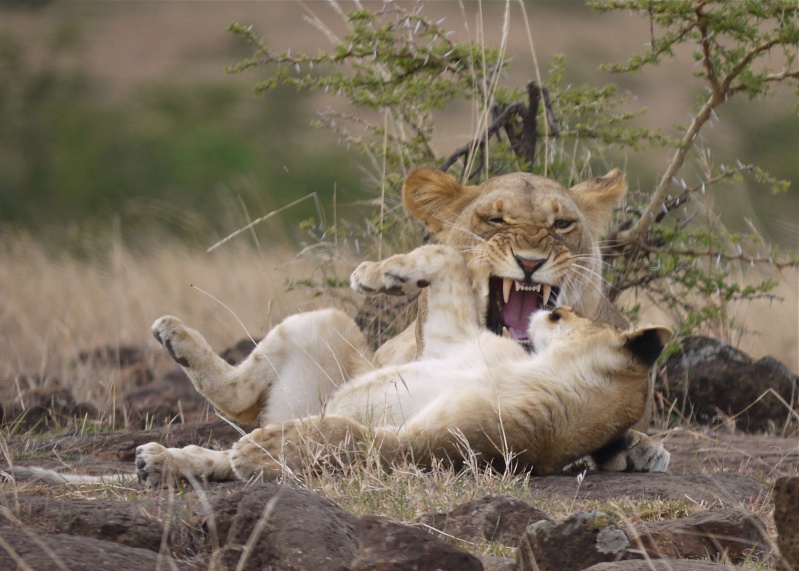 "And no biting please" 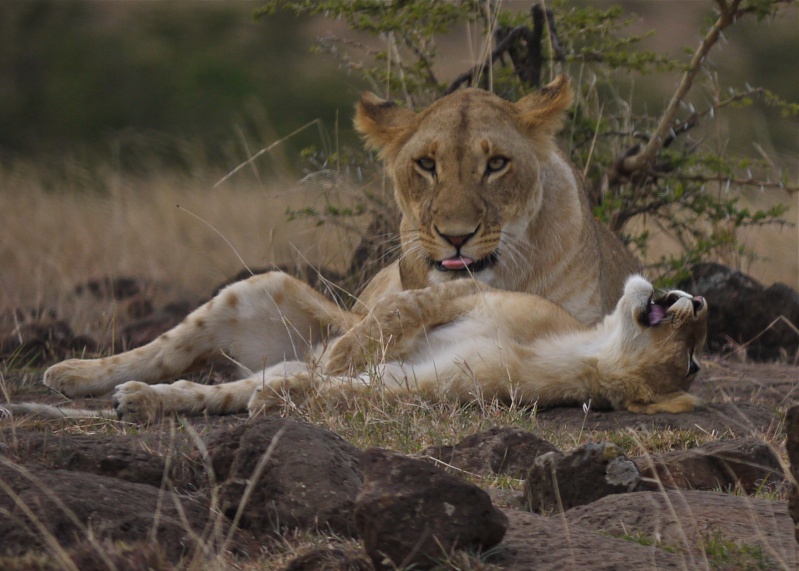 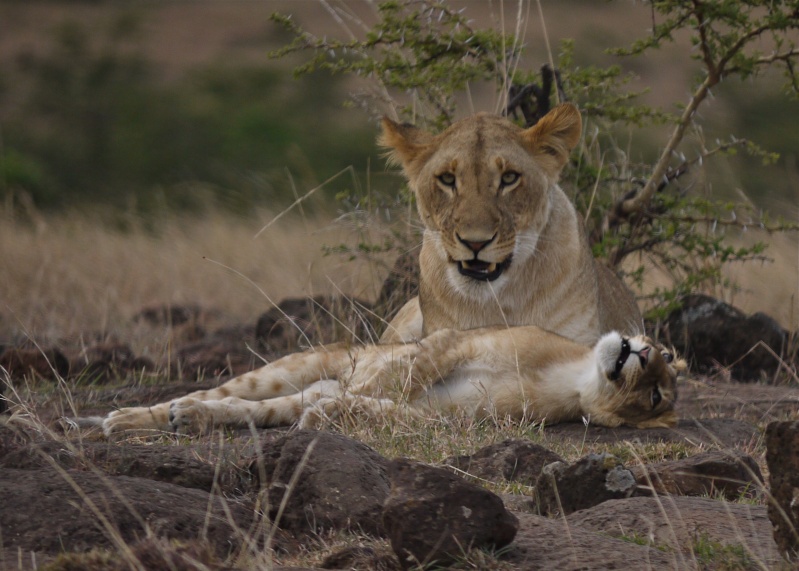 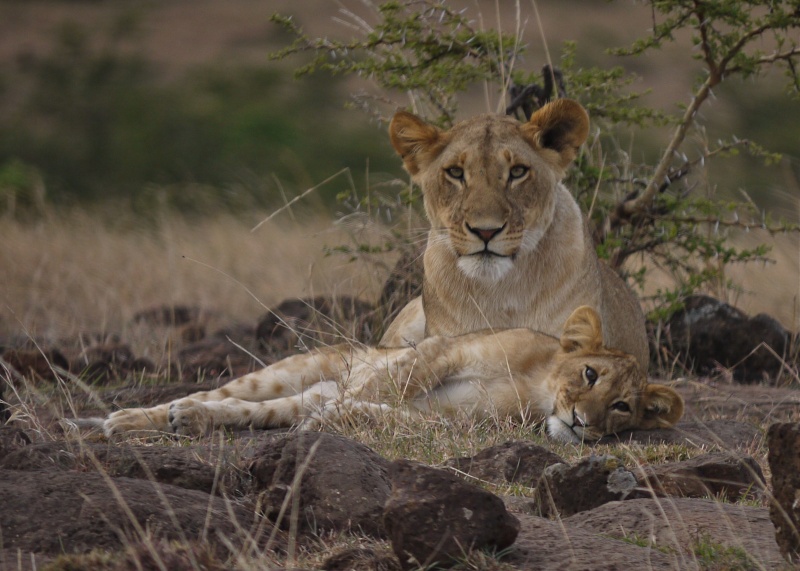 "Thank you big sister I am tired now" 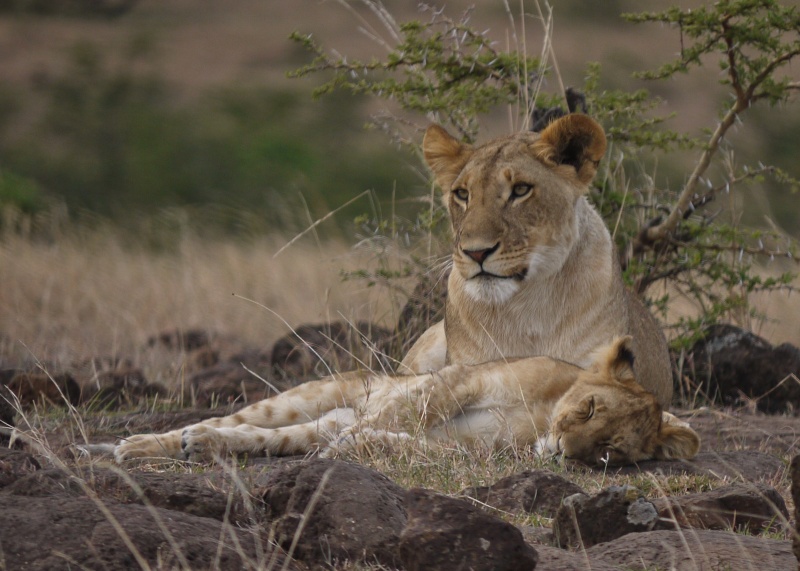 Safariman. What great photos and a lovely story as well. Sounds like Mara North and Offbeat is a definite for our next safari, I would love to see all those lions.

Goodness, you can really see the bond between the two sisters can't you and actually I think they look like Mother & Daughter, they are similiar facially, also that cub has massive front paws, they are huge so I wouldn't be surprised if she turns out to be a rather impressive adult Lioness.
As I said in your other post safariman, I wonder why the mother gave up on her, often when a litter mate dies it brings the remaining cub and mum closer, so it's a little strange she lost interest or do you know if it was her first litter?
They really are gorgeous photo's and I loved the little story too, I can imagine it was a fantastic time of your trip and it's good to know the other little cub is doing well nd I bet those boys love being masters of two prides!

Nice name for the Pride, 'Offbeat', I like that. Awww bless that little toot getting disowned by it's mum

Is it just me or does the cub look a wee bit skinny ?

Lovely shots though and its plain for all to see from them that the two sisters get on really well together, you've captured them brilliantly

Great selection of shots Safariman to go with a really good story line. it had me

when it got to the tickling bit. It does look like a really strong bond between the two, and as Doogs said reminded me straight away of Chesa & Sala from BCD. I have heard of the Offbeat Pride before, but I cant remember where proberby on FB or one of the Blogs. It's great that Ian has negotiated exclusive use of that area. Clearly it enhances the visitor experience, but it also provides a safe base for the Pride from Maasi confrontation with thier cattle, and thats really good news. I agree Doogs, the young Cub in the first shot does look a bit on the thin side.

I am not sure LW why the mum was ignoring her cub. I can only assume that she felt the cub was fully weaned and that she might well have gone off in search of a male to mate with again. It was not her first litter as the cubs constant companion was also her daughter!! One thing I noticed with all 3 prides that I encountered was how spread out they were. We kept coming across them in ones and twos even when hunting and not all together as is often shown in documentaries. Whenever we came across the cub which was almost every day she was always with her sister, I have posted another couple of photos of them playing taken a couple of days later.
I agree Doogs and WS that the cub looked in need of a good feed. The photos were taken on the day I arrived at camp and every time I saw her afterwards I kept hoping to see her with a full belly. Unfortunately with the pride being spread out and she keeping company with the 2 sub-adults whose hunting skills left a lot to be desired the chances of her getting a good meal were slim. It was not until early on the last morning of my stay that we came across 3 members of the pride plus the cub making their way back to Lion Hill after a nights hunting with thankfully full bellies. Its a hard life for predators, having to kill to eat is not easy. I will do a post in the future on their various attempts at hunting. 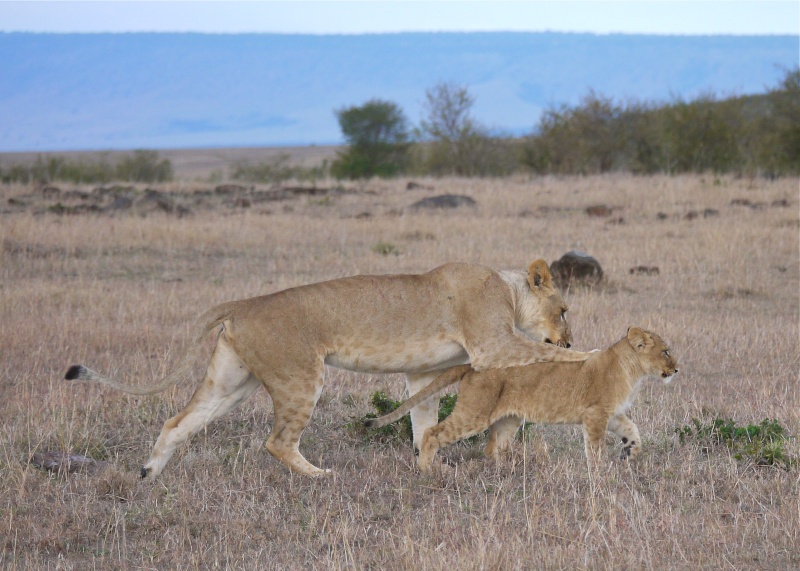 The cub and sister playing together in the early morning. 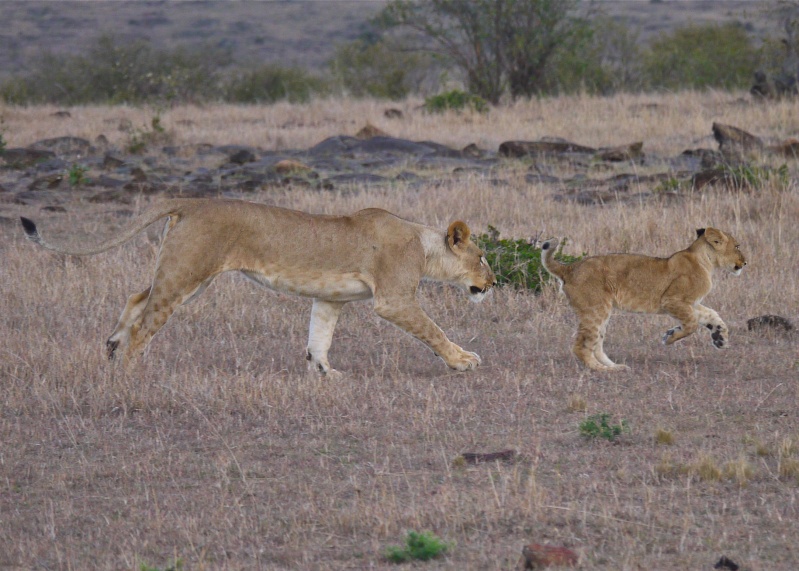 Catch me if you can!!

A full belly at last!!

Thanks Safariman, maybe that is just what it was, tough love, being weaned and having to get on with it and learning to survive and finding your place within the pride to compete for food at feeding time. I must admit it was nice to see her with a full belly in that picture though, she did look well in the other pictures but she did look a little lean round the rump. Loved seeing her and her sister playing, they obviously have such a strong bond and I wonder if Big Sister was left at about the same age by mum and thats why they have such close bond, it would be interesting to know how this little one will react when mum has cubs again, whether she will take on the role of Big Sister?
Look forward to more pictures Safariman, I can cope with the attempts but not the gory dinner table ones!

You can tell they certainly enjoy each others company from the photos, and its good to see the little one with a full tummy. I wonder if the prides are split up so much because of the size of prey they can catch, if the available prey is on the small size it would be difficult for the whole pride to feed on the kill, and it may be better for them to hunt in smaller groups. just a thought.
WS

Loved your story and photos of the sisters, and this bit especially cracked me up:

They are "serviced" by 3 males who spend their time moving between the Offbeat Pride and the next door Cheli Pride. During my stay the were mostly with the Cheli Pride which presumably has better looking girls!!

I also liked, "Stay still while that funny man takes our picture"!

Lion Prides often split up when the food is scarce, I think this shows their intelligence