Wild About Animals :: Wildlife Blogs of the World & Updates 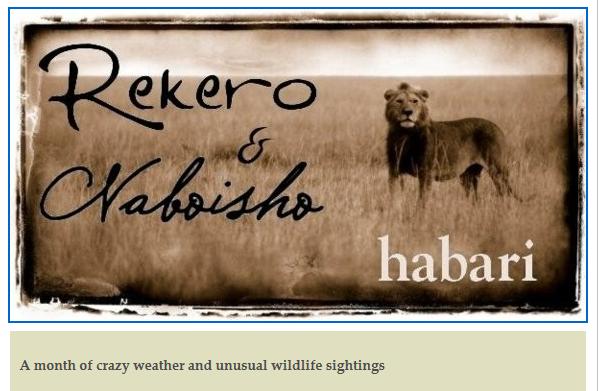 A month of crazy weather and unusual wildlife sightings

February is meant to be dry and hot! Instead it’s been wetter than normal. Early in the month we had enough rain to sustain grass growth and this was followed by a cold spell. We had thick mist and no sunshine for an entire week. Temperatures plummeted to 10°C degrees during the day. Subsequently we discovered it was all due to a cyclone off Madagascar. Other parts of the Mara got good rain, but here it was mainly cold and cloudy. Things returned to normal during the latter part of February and hot weather coupled with strong winds was the order of the day. At times the wind was so strong that we were afraid the tents would take off and never be seen again. Thankfully, they stood strong and we suffered no damage.

Around Rekero the scenery is quite breathtaking now. The grass is high and when the wind blows the afternoon light makes it shimmer in waves, just like an ocean made of golden threads (see photo below).

The Elephant Pepper tree is fruiting and lots of visitors are popping into the camp. A large troop of baboons, elephants and even a giraffe stopped by for the feast. The elephants are the naughty ones and have caused some damage. One was feeding on fallen fruit right at the entrance of a guest’s tent the other day. When the guests closed the curtains to prevent the fellow from spotting further tasty morsels inside the tent, their movement gave him a fright and as he lifted his head, his tusks snagged the netting on the verandah and tore a hole in it. Fortunately they only noticed the damage the following morning. And so, yet another Rekero tale will be told.

As the weather becomes drier the elephants make good use of the water we put in the buckets outside the tents. Guests love seeing them drink water so nearby and the elephants enjoy it too - we aim to please all our visitors at Rekero…

With the migration now in the south of the Mara, prey is less plentiful in our area and resident lion have their work cut out to find enough food. The cubs are always the first to suffer and some of them, unfortunately, seem rather thin and weak.

Some of our guests were privileged to witness some rare sightings recently. Amongst these were elephants mourning the death of one of their own and the extraordinary intera_ction that occurred between lion and hyenas around the carcass. The elephants tried to prevent the hyenas from feeding on their dead family member, frequently charging and chasing them in all directions. Sadly, as in all things nature took its course and, after some time had passed, the elephants moved on. Leopard sightings have also been good this month and Malaika, the cheetah, has also been seen of late. We even heard that a guide had seen her new litter consisting of six cubs. This is great news, as her previous litters all comprised of four cubs. (Who says girls don’t get better with age!). Our resident guides are yet to spot them, and we can’t wait to share the information with you.

Until our next update - Salaams to you all!

Thanks WS. I had the email too but as you know have never worked out how to post it

Thanks WS, I hadn't read my email. How strange that they have ben having the same weather as us, high winds and then the fog, you can be all tose miles apart and the weather can be the same.
Sad to hear that the Lion cubs are suffering with the lack of food, that's never nice to read but great news about malaika and her 6 cubs, that is wonderful news isn't it. It's also sad to read about the death of an elephant, It sounds as if they did a valiant job protecting their family member from the Hyenas but as they say, nature takes it course.

Thanks for posting this WS

Thanks Doogs. I am so behind with all the blogs!

Long time since we've seen anything from Rekero thanks Doogs

Asilia Africa have a blog which covers all their camps in Kenya, Tanzania and beyond.

Wild About Animals :: Wildlife Blogs of the World & Updates